Picking up where I left off yesterday:

I went to Madison Square Park with my awesome fantasy novel which does not in any way shape or form label me a giant nerd, and sat on a park bench and read and watched the puppies/children/hipsters in strange clothing.  I gawked at the extremely long line for the Shake Shack and decided that one day I should get a milkshake there, because milkshakes are delicious.  I also guarded my purse from KILLER SQUIRRELS who were obscenely socialized because people kept putting them in their laps and FEEDING THEM.  One squirrel actually came up to me while I was reading and poked his face and paws into my handbag.  I promptly got up and moved to a less squirrel-infested area of the park.

My dear dear dear dear dear friend Philip Chernyak called and I went to Hell’s Kitchen to meet him for dinner.  We ate Turkish food.  I had some kebabs.  I also took some kebabs home to eat for lunch today.  Then I had Pinkberry–mind you, I’d had Red Mango earlier in the day.  No such thing as too much tart frozen yogurt, says I.

I came back to Santosh’s and turned on the basketball game, about whcih we will not speak.  Santosh and friends returned from painting an apartment.  They were paint-spattered, but Santosh was joyous, for his team won.   Massive Cleveland failure, sigh.

Anyhow, festivities occured–I’ll just say that we went to a bar called Drop Off Service and didn’t get home until 4:00.  Sometime during this period I consumed a grilled cheese sandwich.  Also delicious.

This morning, or should I say this early afternoon because I slept in and it was glorious, I headed uptown to see the Salute to Israel Parade which commemorated Tel Aviv’s 100th anniversary.  The event wasn’t a parade so much as many groups of people marching up 5th Avenue waving Israeli flags.  Much Israeli pride, many many many New York Jews and adorable children, some Israeli music I recognized from my days at the JCC and Ramah Darom, and surprisingly few protestors.  There was a designated protest zone near the fountain in front of the Plaza Hotel, but otherwise the mood was positive.  Also, there was a troop of JEWS ON MOTORCYCLES.  I’m sorry, that makes me very happy. 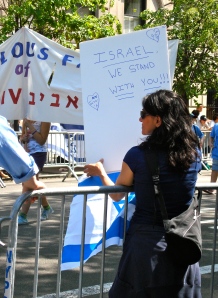 I walked along the parade down 5th Avenue, and hopped in and out of a few stores (of course) and also into St. Patrick’s Cathedral.  The view across the street from the Cathedral always amuses me–Atlas, facing down the Catholic church.  Good times.

I eventually returned to Santosh’s, after a brief stop at Barnes and Noble to get the next book in the fantasy series which I am reading that does not in any way shape or form label me as a nerd, to collect my largest suitcase.  The suitcase and I traveled uptown to the apartment that I will be subletting starting Wednesday.  It was my first time seeing the apartment and meeting the woman from whom I will be renting.  The apartment is spectacular and I will be posting pictures once I am settled.  The woman, a middle school math teacher at a nearby prep school, seemed very friendly and was wearing a lot of Tory Burch and Vera Bradley, as well as a pair of pearl earrings.  The apartment is newly rennovated and a few repairs are still being completed, but I am looking forward to moving in–again, it is gorgeous, and extremely close to the Whitney.  Oh, I also saw this sign in the lobby of the building:

I left the apartment (my suitcase remained) and ran a few more errands before heading back downtown, grabbing some dinner, and returning to Santosh’s apartment.  Now Santosh and I are chilling, watch Dexter (so. good.) and generally preparing for The Week to Come.  I start my internship at the Whitney tomorrow.  Very excited!