Sunday was fairly uneventful in the morning: just laziness and lolling around the apartment.  After Jon left to go to the airport I hopped on the subway to head downtown for the Pride Parade.  I’d always wanted to observe NYC Pride, so I figured I’d go walk along the parade route.  The route started on 5th avenue in the 50s and turned onto 8th Street to head into the West Village and, of course, Christopher Street.  I joined the parade at 23rd Street and walked downtown with the parade to Christopher Street, which was (of course) a madhouse. 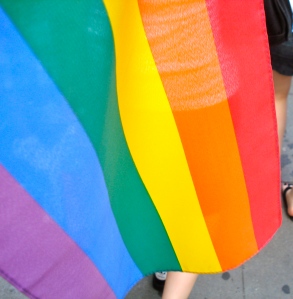 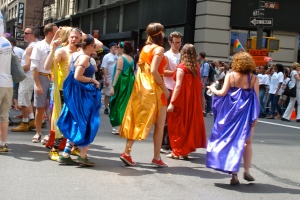 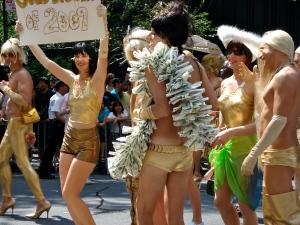 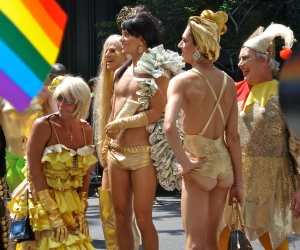 The 20s were fairly calm: lots of flags and music (Madonna, Cher, Black Eyed Peas, anything danceable with a bass beat).  I saw some boobs (evidently toplessness is allowed, or at least ignored, both within the parade and amongst the watchers) which really should not have been displayed.  I picked up a flag around 14th Street.  Lots of older couples were walking around with cute dogs.  The sidewalks also hosted numerous confused tourists, who clearly weren’t sure what precisely they had discovered. 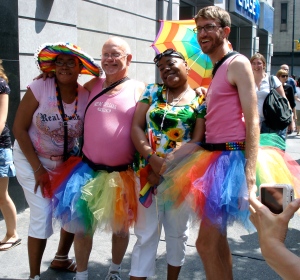 Once the parade veered into the Village things got a little crazy.  I ended up alongside the Caribbean Gay Pride contingent for awhile: lots of well-muscled men in feathery outfits.  The woman on the adjoining float was from Trinidad, and once the parade hit Christopher Street she led the crowd in the chants “I like pussy!” (for the women) and “I like big cock” (for the men).  Good, clean, classy fun folks. 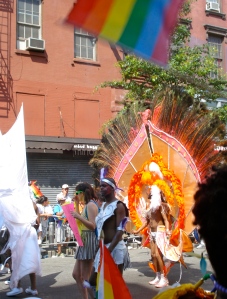 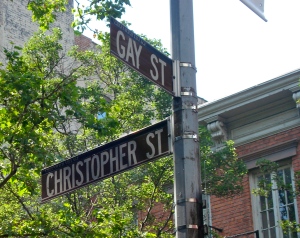 I had to flee once the parade hit Christopher Street.  I was able to see the Stonewall Inn from behind the gates of Christopher Park, but I decided I’d had enough of the heat and the crowds.  People kept asking me where the Pier was (the place where the after-Parade dance party is held) and I had to tell them that I had absolutely no idea.  While I’m glad I got to see the energy in the Village, I think that watching the parade in the 20s, 30s, and above is the most pleasant and least crowded experience. 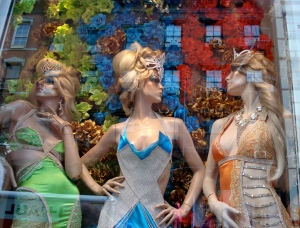 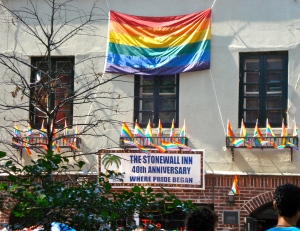 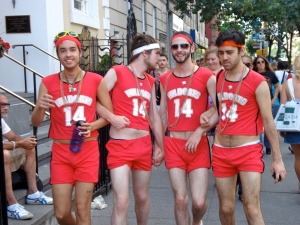 Of course there were a lot of marriage-themed floats and marchers.  I think a lot of New Yorkers are angry that the state of New York is less progressive than the state of Iowa.  Overall, however, the mood was joyous.  I’d read an article earlier during the week in New York Magazine about the generational divide separating middle-aged homosexuals and homosexuals in their twenties, and the generally joyous mood of “protest” caused me to really consider what was stated in the article.  An interesting read, if you have time.

After peeling away from the parade I realized I was a) hot b) tired and c) by Bleeker Street which has a ton of frozen yogurt shops (of course).  My sister had told me to check out Yogurtland, a self-serve fro-yo place, so I stopped by and got a mix of green tea, plain tart, and taro (my new favorite flavor) yogurts and doused them with mochi, strawberry, and white chocolate chips.  Self-serve fro-yo isn’t a bad concept but the yogurt was a little too icy for my taste, so I think I’ll return to Red Mango.  Still, a nice pick-me-up after several hours of walking around downtown. 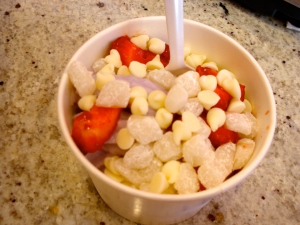 I headed back uptown, grocery shopped, and ran in the park for a bit before calling it an evening and returning home to tidy up the apartment.  Now all my guests are gone, the apartment is back in order, and I’m trucking through Week Five.  Weekend has been updated, check back for updates from the week!