I love the 4th of July, because it is all about eating delicious processed meat and watching loud shiny things explode in the sky.  I mean, awesome, right?  I spent the first half of yesterday sleeping, taking a lovely run in Central Park, running errands and then awaiting the arrival of my cousin Carly.  Carly arrived around 4:00–it was great to see her, even if it was just for a short time–and opted to stay in and relax while I met Ashley and her Wellesley friend Gabby in the park for an impromptu picnic of many hot dogs  and chips and salsa.  I decided to swing by Crumbs Bakeshop to pick up some cupcakes for the picnic; it was the smartest idea I have had in a long while. 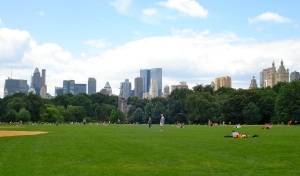 The three of us had a lovely and relaxing picnic and consumed many hot dogs which are awesome.  We did our patriotic duty.  After a few hours of sitting and nervously watching two guys playing catch with a giant soft ball right over our heads we decided to head back to my apartment to check on my cousin.  Carly was happy being chill so Ashley and I left to walk to Herald Square to a 4th of July party and Gabby headed back to Brooklyn to watch the East River fireworks with her parents.

The 4th of July party was being hosted by a friend of Phil’s.  This friend lives in a really sweet bachelor pad that looks like it belongs in the ’80s.  Leather couches and a leather headboard on the bed, lots of clear plastic tables, a giant Transformers poster and odd Terminator trinkets and the like.  I mean I half expected Patrick Bateman to emerge from the bathroom in a clear plastic rain slicker and ask me if I liked Huey Lewis and the News.

Anyhow, this apartment is located in a high rise just off of Herald Square.  You can see Herald Square and Macy’s from this guy’s bedroom–he says he can see everything during the Macy’s Thanksgiving Day Parade, and enjoys simultaneously watching the action on television as he watches out his window.  This apartment has a roof, and the roof has a view of the Hudson river, as well as a really fantastic view of this building: 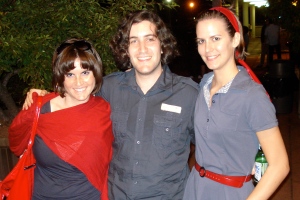 The fireworks commenced around 9:30.  We had a pretty decent view of most of them–a building blocked some of the lower fireworks, but what can you do.  I was behind this dreadful woman who was probably from Jersey and looked like she could have been anywhere from forty to sixty but I wasn’t sure.  She was wearing too-tight clothes and a too-short skirt and her ugly cheap weave was pulled into a pony-tail.  She would not shut up for the entirety of the fireworks.  She kept doing things like making her own firework noises alla “BOOM BOOM BOOM” and after every firework she would say “SUH-WEET” and snap some pictures with her flash camera.  We all kind of wanted to throw her off the roof.  We refrained, however, and I took some non-flash pictures of the fireworks with my camera. I love fireworks, they make me feel like I am five. 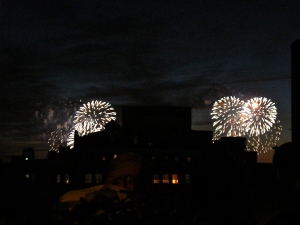 Post-fireworks we went back inside and ate more processed meat (hot dog number three for me!) and milled around a bit more before deciding to take an impromptu trip to the Beauty Bar in Bushwick, Brooklyn.  Also, I took a picture of the apartment owner’s stuffed penguin.

So a slew of us trekked out to Brooklyn and danced and drank for a few more hours.  I left the party a bit early because I knew it would take me awhile to get back into Manhattan (it took a little over an hour, I was correct, I am sad to say) but apparently the festivities went on long after my absence.  I wanted to get to bed at a semi-decent hour, however, because I was getting up early today to go to the Dia: Beacon.  I will tell you gentle readers about that tomorrow.  For now, I leave you with some photos of last night’s dancing in Brooklyn at the Beauty Bar.

Hope that y’all’s 4th of July was as excellent as mine.