No Sugar Rush this Monday!  I overdid it a bit this weekend, so I’m taking the day off from conspicuous consumption of food.

Sunday morning I roused myself early to catch a train from Grand Central to the Dia: Beacon, the Dia foundation’s museum in a converted Nabisco factory in the little town of Beacon on the banks of the Hudson. I met up with Phil and my fellow intern, Theresa.  I was uber-groggy from the festivities of the night before, but we do what we must in the name of art.

The train ride to Beacon is a lovely, eighty-minute jaunt along the Hudson River.  The transition from urban gray concrete New York City to lush and green and natural is really relaxing, and eases one sloooowly (but in a most welcome manner) outside the hustle and bustle of the city.  Gentle rocking moving vehicles tend to put me to sleep, so I definitely zoned out for about twenty minutes.  Still, I was awake for much of the natural splendor.  It is amazing that such quiet exists so close outside the city.

Dia is a foundation for the support and preservation and display of art from the latter half of the twentieth century.  The Dia: Beacon was built from a converted Nabisco factory for the display of monumental pieces of contemporary art that could not ordinarily be displayed in museums.  The factory is a short walk from the train station, and is set in beautifully landscaped grounds that were designed by Robert Irwin.

I’m a really big fan of this museum.  I went a few years ago with my parents, when the museum first opened, and was excited to return.  The large factory space with its high ceilings, industrial floors, and plenty of natural light provide a really dramatic setting in which to view incredibly dramatic pieces of art.  The museum doesn’t allow photography so check out the links for pictures.  Some of my favorite pieces:

The monumental Richard Serra sculptures in the former loading bay of the factory; large, rusty, labyrinth-like spirals and caverns and canyons in which you can get wonderfully lost.

The Michael Heizer voids in the floor of the museum–you cannot see how far they descend, and the area is incredibly shadowy and silent.

The Robert Smithson assemblages.  Love this artist, wish he hadn’t died so young, his work is amazing.

Louise Bourgeois in the attic!  The best place to put the creepy biomorphic surrealistic work by this artist who focuses so heavily on memories.

Bruce Nauman in the basement.  Creepy-pornographic neon displays, a large video installation, odd interactive pieces with video cameras–what more can you ask for?

The (sadly) temporary Sol LeWitt installation of really incredible, precise, detailed, disorienting wall drawings.  They’re only up until mid-September, and you should absolutely check them out!

Anyhow, I really think this is a special museum and it provides a really unusual space for looking at art.  The galleries are so large that you only ever see a few other visitors at a time, so it is as though you have the entire museum to yourself.  A really magical, unusual museum experience!

We did stop at the museum cafe for lunch (human necessity, alas) where Phil and I each had mediocre sandwiches (again, necessity).  We finished exploring the museum after a few hours and decided to check out Beacon, which is about a fifteen minute walk from the museum.  Beacon is a tiny little picturesque town with one street that has galleries, restaurants, coffee shops, etc.–and not much else.  Still, it was a welcome change from the noise and crowds of New York City. 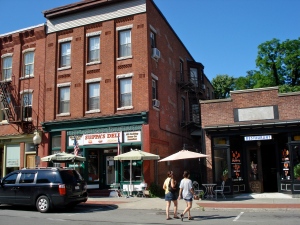 We got some ice cream, which was necessary, and then headed back to the train station to return to the city.  The train ride provided another opportunity for rural gazing (beautiful houses on hills, ponds rimmed with willow trees, clear blue skies etc.) and a catnap.  Phil told Theresa about the history of video games.  A good time was had by all.

We were back in the city by 7:30.  Phil and I grabbed some sushi and Red Mango, and then I headed back home to rest up for the work week.  Week Six has commenced, four weeks left!