After the WhitneyKids event I ran home to try to cobble together some pseudo-hipster outfit to head into Williamsburg.  My friend Chris’ band, Morningbell, was playing at a bar that night and I was going to meet Phil for dinner.  As most of your know I own absolutely nothing even remotely hipster so I settled for a low-cut black dress, a scarf, and a lot of black eyeliner.  Sometimes you just have to Macguyver an outfit, folks.

This was my first journey into Williamsburg, which was more or less what I expected though I thought i’d see more hipsters, honestly.  I did hit Bedford Avenue just as a public artwalk was closing, so I saw some decent attempts at street are and one really ridiculous attempt at performance art which involved the cutting of a weave.  Seriously. 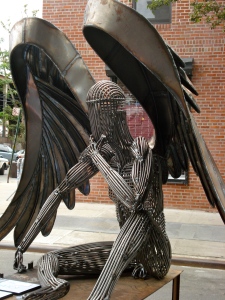 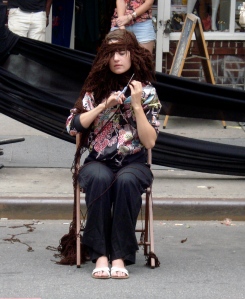 I’d gotten to Williamsburg a little early, and so wandered up and down browsing the area.  I saw a cool robot mural, and an extremely odd assortment of junk in a garden.

Phil and I connected and headed to Egg, a trendy Brooklyn restaurant and one of the first establishments to kick off Williamsburg’s Southern/down home food revival.  Egg, as you can imagine, does breakfast all day (which I love) but they also have other Southern classics.  We were a little gluttonous. We ordered a chicken liver pate plate to share, which was absolutely delicious and came with really fresh mustard and caramelized onions.  Just, amazing, moussey, delicious chicken liver pate.  For dinner I had an omelette with broiled tomatoes and a biscuit the size of my head.  The biscuit was moist and buttery, one of the best I’ve ever had, with some sort of a fruit preserve on the side.  Phil had eggs sunny side up with hash browns–more like a nice crispy potato ball with much pepper and seasonings–and some five-grain bread from Amy’s Bread.  He also had a broiled grapefruit with mint, which was extremely fresh and fruity.  Egg does simple foods fresh and well, and we both left extremely full and extremely pleased.

Phil and I had some time to kill before Morningbell played, so we decided to try and find the waterfront.  We walked up North 5th Street and ultimately hit the 5th Street pier, which heads out into the East River and offers lovely views of the Manhattan skyline.  Unfortunately it was extremely hazy and overcast, so the pictures are not as excellent as they could have been.  However, the Manhattan skyline is pretty impressive on its own, so there you go.

While on the pier we saw a man fishing in the East River.  He had four poles set up against the end of the pier.  One of the bells on one of the poles started ringing while we were on the pier.  The man waged a gargantuan battle against fish, and the fish lost.  The man had caught a fish.  A giant fish.  And he planned to eat it, I believe.  I think he is going to catch mercury poisoning. 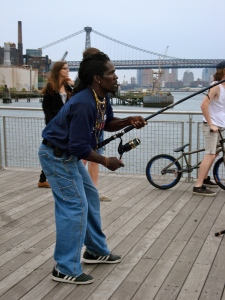 Phil and I decided we’d seen enough of the East River at this point, and so decided to head back toward Bedford and to the bar where Chris would be playing.  Which will be another post!  I just cannot include dead fish and awesome music in the same post, though evidently I can include dead fish and delicious home style food.  Whatever, I do what I want.