Friday I decided to head out to Governors Island, the little island/former military outpost off the southern tip of Manhattan that has been transformed into a park.  You can reach said island by a free ferry that leaves from port adjacent to the Staten Island Ferry terminal.  The island is open Friday-Sunday during the summer, though there has been talk of opening the park for the whole week in future summers.  Governors Island has really exploded in popularity this summer–New York Magazine article and everything (because evidently New York Magazine is atop the zeitgeist; the New York Times, I have found, usually publishes a similar article a week or two after New York Magazine).

I got downtown a little before 1:00 (ferries were running to Governors Island every hour on Friday, they run more frequently on Saturday and Sunday) intending to catch the 1:00 ferry.  However, all the construction they are doing around the Staten Island Ferry really confused me, so I ended up missing the 1:00 ferry.  I decided to grab some lunch from a Halal food cart and picnic in Battery Park.  I learned, by the way, that not all Halal carts all the same.  The one in Chelsea near the Whitney storage was way better than this financial district cart, which had bland, under-spiced food.  Sadface.  Still. Battery Park was lovely, aside from all the tourists and the finance-douchebags smoking their cigars (I saw a number of these men, I assume they all suck);  lovely views of the waterfront and the Statue of Liberty and Ellis Island. 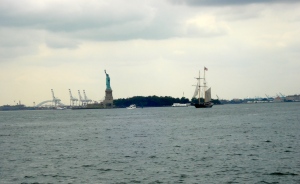 I successfully caught the 2:00 ferry to Governors Island and within ten minutes was on dry land, across the water from Manhattan but thousands of worlds away.  The island still has the buildings from the military days: old abandoned 1920s houses, fortresses built in the 1800s, old hospitals and mess halls and even a theater.  Many of these buildings are open to the public.  The park is free to wander; you can rent bikes or stroll at your leisure.  Most of the accessible buildings and ground are concentrated at one end–I didn’t get to the opposite end, with Picnic Point, because they had closed that section down by the time I thought to walk there.  Evidently it has glorious views of the Statue of Liberty.  The middle of that section of the park should be open within the next few years.  For now it is only accessible by the 2.2 mile promenade that circumferences the park proper.

The park has many art installations, including a house in Nolan Park (an area with all yellow houses where I believe officers lived; regardless it was pretty) which was filled with sculpture, including a shell sculpture on the outside.

Many of the buildings also held art installations sponsored by the group Creative Time.  All of these installations, made by numerous artists, were collected under the title Plot 0/9 This World and Nearer Ones.  I didn’t track down all of the art works (there are probably fifteen to twenty works, scattered over the entirety of the park) but I saw some video work, including a ridiculous film by The Bruce High Quality Foundation that spoke of the demise of the art market in the language of a zombie movie with some help from the song “Summer of ’69.”  This was shown in the actual movie theatre, which is abandoned and dark and scary, so that worked, but I’m not sure if the film itself did. 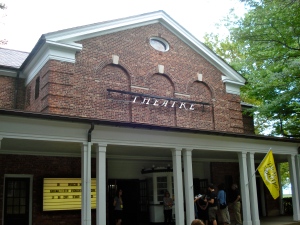 More successful was Anthony McCall’s really spectacular light installation, set in the pitch blackness of St. Corenlius Chapel.  The entrance into the darkness is unsettling, but the installation itself is really astounding and almost sculptural, and seems to give substance to that which has no structure: light itself. 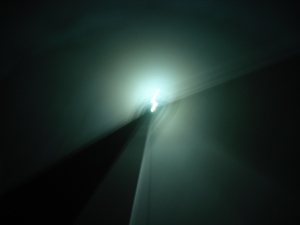 A lot of the works I didn’t even realize were part of the Creative Time installation until after my visit.  These were things I noticed as odd but didn’t think to pursue, such as the fact that the words “Sheep” and “Goats” are written on the ferry, or a message painted alongside the Manhattan port from where the ferry departs.  A tent city near the old hospital also aroused my attention, but I figured it was probably set up for some of the workers on the island.  False: it was an installation by Nils Norman.  Many of the installations were like this, subtle, and blending into the surroundings, such as Klaus Weber’s giant wind chime.

Anyhow, the Creative Time project brought an extra sense of whimsy to the island.  For a complete list of the artists and works go here.

Little, non-Creative Time art surprises are all over the island. 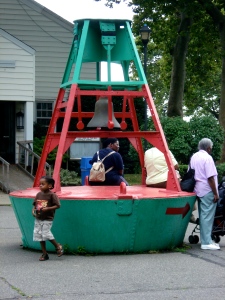 Behind Ligett Hall in the center of the island was a field called City of Dreams, which was filled with art installations by the group Figment, including a crazy mini-golf course made from junk.  Seriously!  It was pretty rad, and there were tons of kids running around being, well, kids.  One half of said field was filled with sculpture, the other half held the mini-golf course. 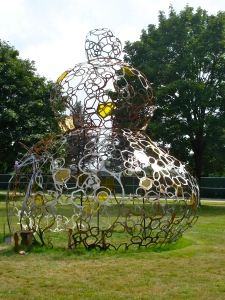 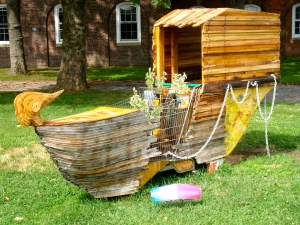 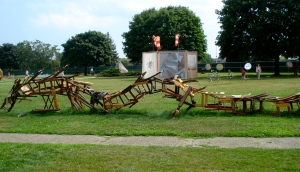 Also on the island, near the dock, is a beach shack type place called Water Taxi Beach. Said beach includes sand, picnic tables, beer, hot dogs, burgers, etc.  I believe later on in the summer there will also be music events at Water Taxi Beach. 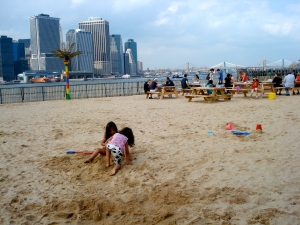 Anyhow, that more or less sums up my day on Governors Island.  Two thumbs up for an odd, whimsy, ghost-town-yet-not-scary-feeling island just off the tip of Manhattan.  A few more pictures, because I can: 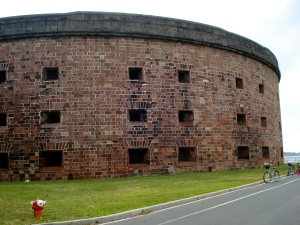 Oh, also, I got a bagel when I got back to the Upper East Side, from Tal Bagels on Lexington near 80th.  The bagel was decent, and filled with hummus, though it probably would have been better had I eaten it at the store rather than walking home.

I know I am way behind schedule and I know this post was long and I’d like to say future posts won’t be as long but that’d be a lie.  I have company in town now so I am trying to catch up as best as possible, but sometimes you have to play hostess!  And sometimes you don’t, like when said friends are content browsing the Met.  All it well.