We’re still on Friday, folks.  Yes, after Governors Island I cleaned myself up and hauled myself back into the world.  More specifically, I hauled myself down to Canal and Lafayette in Chinatown to check out Andrew W.K.’s club, Santos Party House, with a small gathering of Pine View people.

I’d been curious about Santos Party House since reading this New York Magazine article a few months ago.  Well this sounds fun, I thought to myself.  I love Andrew W.K.  I enjoy dancing.  I like the idea of a laid-back, unpretentious dance space, imbued with Andrew W.K.’s quirky-awesome all-inclusive joyful philosophy of fun for all and all for fun.

I think the publicity etc. has sort of spoiled Santos’ vibe.  We went on a Friday night, which is one of the more popular nights because Q-Tip is the DJ.  Or at least he’s supposed to be, I don’t know if he DJed after I left (which was a little bit before 2:00) but he certainly didn’t spin while I was there, he just sort of flitted about in a green shirt.  But I’m getting ahead of myself.

So there was initial confusion in terms of entering Santos because the club schedule works via shows, called “parties” in Santos-speak, and there was a mess because the earlier show was overlapping.  Initially they wouldn’t let us in to even just hang out but after a bit of persuasion they let us stand at the bar for the end of the first “party.”  We were then kicked back out into the street for the later, Q-Tip party.  We re-entered the club, paid the cover, etc.  The club is split into two rooms: a downstairs lounge type area which is dark and groovy, and a really great upstairs performance area with a large stage, video monitors with installations, and a giant disco ball. 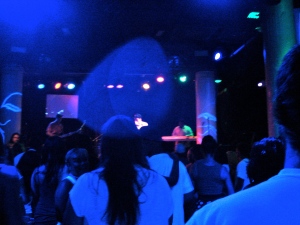 We hung out in the downstairs area, which was playing questionable R&B music, until a little before midnight (I think) where when we wandered back upstairs to see the live show which preceded supposed Q-Tip spinnage.  The first band was awful and nondescript.  The second performer, a soul singer with great hair and a better voice named Melanie Fiona, was second, and she was much loved by the crowd.  Probably because she was hot.

After Melanie Fiona actual music/dancing started.  And for the first half an hour or so the music was good.  Dancing was good.  Fun was had.  I could understand the vibe of Santos–despite the surly and unfriendly bouncers and the expensive drinks (although reasonable in terms of New York City prices) and high cover–as being super-fun and all-inclusive and in the vein of the neon-colored signs Andrew W.K. posts around the club encouraging dance and joy and drinking and fun.  For a brief period of time, all was well. 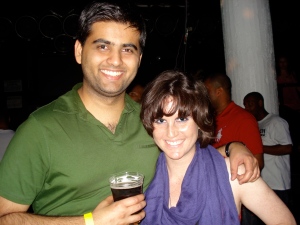 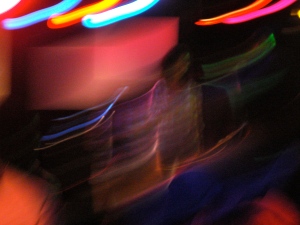 It was all downhill from there, alas.  The club got too crowded, to the point where I couldn’t even dance because I kept getting jostled by pushy hipster girls with horrible hair cuts and large men with questionable intentions.  The music got repetitive and boring, and became entirely not-danceable.  Also, it got hot.  And crowded.  And boring.  Really, more than anything, it was boring.  Which, you never want a club to be boring.  So a little before 2:00 I left.  There was a line outside the club, a long line, and it would probably just get longer.  Maybe Q-Tip started spinning after I left?  Maybe that made it better?  Either way, I’d be willing to check out Santos on another night (not-Fridays have rotational “parties,” including less-known artists and even performance pieces) but I think Friday night at Santos + Lindsay = Failure.

Or maybe I’m just getting old and boring myself.  Who knows.

One thought on “Santos Party House”