Back to work today!  Theresa and I will be downstairs in the subcellar this week cataloging works.  Today we worked on a series of really fabulous oversized Buckminster Fuller prints.  I love getting to see and handle the art, and today we were extremely up close and personal.  My only real coplaint about the subcellar is that it can be a little inefficient, especially when handling large works.  We need art handlers to deal with large prints, so sometimes it can be a little slow if the art handlers are busy.  Still, I really love the prints with which we are working.  Later this week we’ll get to sit in on a curatorial meeting where the curators approve new works–we get to watch said approval and then curate said works.

After work I decided I needed cupcakes, stat.  I trekked across the Upper East Side to Two Little Red Hens and was caught in a monsoon-style rainstorm right when I hit 2nd and 80th.  I battled the rain to the cupcake shop and ordered several cupcakes to go as well as two mini-cupcakes (red velvet and yellow cake with vanilla frosting) to keep me company while I waited out the rain. 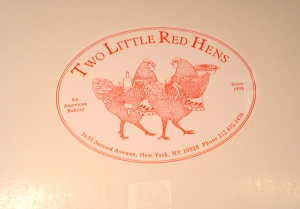 The monsoon eventually reduced to a drizzle and I headed back to my apartment to meet up with Mara, who had to collect her bag before heading back to Chapel Hill;  I’ll be following her in a week.  Yay.

I decided to have some of one of my cupcakes as a pre-dinner snack.

Also, a little something extra on the inside: CHOCOLATE. PUDDING.  Chocolate pudding, in a cupcake!  Genius!

I love pudding and I love cupcakes so this really was an all-around win.  However I only had a few bites, because I wanted to a) eat dinner and b) go to the gym.  Also c) don’t want to get fat.  I had a few bites of the red velvet for dessert post-dinner (the red velvet at Two Little Red Hens is to die for, lovely and light and fluffy and the cream cheese frosting is amazing).  I’ll nosh on the cupcakes through the week as little snacks.  If I ate all three at once it’d be delicious but also a failure in terms of common sense.

I spent the rest of the evening post-gym cleaning house and beginning to pack.  I have a busy week ahead so I wanted to ensure domesticity while I had the time.  We’re in the home stretch, y’all!