Today we were back in the subcellar at work, finishing cataloging the Buckminster Fuller prints.  Which I want.  In my apartment.  Right now.  We also had a group intern luncheon.  They fed us sandwiches and cookies from the City Bakery; the sandwiches were fairly average, I enjoyed my tomato and mozzarella and had a bite of some sort of chicken and cilantro thing that was a little weird.  The cookies were awesome: rich and buttery, though the chocolate chip was a little thinner than I like.  Cookies should have a little thickness and heft. The luncheon was presided over by a panel of former Whitney interns who are now Whitney employees which, I mean, great for them that they were at the museum during a non-recessionary time period where their respective departments were hiring, but their stories of luck and good timing just don’t apply to my current situation.  While it is encouraging to see people who are doing what they want to do and enjoying their jobs, particularly in the arts, the current economic realities just don’t allow for the opportunities the panel employees had when they worked at the Whitney three, four, or five years ago.  Anyhow, hopefully their situation will be my situation at some point in the future.  Fingers crossed, etc.

Anyhow, in more interesting less work related news a group of us from Documentation left work a little early today to pilgrammage down to this really unusual bar in Chelsea called the Frying Pan. The Frying Pan is actually a boat which is docked at Pier 66 on the Hudson River, which, I mean, awesome.  The bar is composed of the boat itself, which sank twice (I believe) before being resurrected in its current incarnation, and a larger slightly more stable barge area with food and tables.

Luckily we sat on the barge side of the establishment, as the boat was rock-rock-rocking and I tend to get dizzy when placed on rocking boat-like objects.  The barge was a little rocky but I managed to ignore it if I was sitting.  The table got a bucket of Coronas (so Florida, or at least it felt so Florida to me). I ordered a diet coke and some much raved about Old Bay Garlic Fries.  Said garlic fries were generally seasoned with Old Bay and, more importantly, studded with whole cloves of roasted garlic.  Which I consumed, copiously immediately, I will be sweating garlic for days.

Anyhow, it was a beautiful summer night, and the boat was on the river, and Jersey was across the river and Manhattan was behind me, and I was with some of my favorite people/interns at the Whitney, and all was well.  I will miss the people in this department when I leave on Monday, and hopefully we will stay in touch, they are solid human beings. 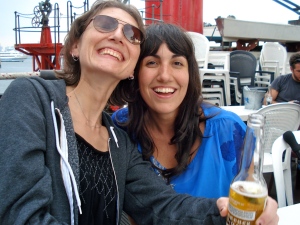 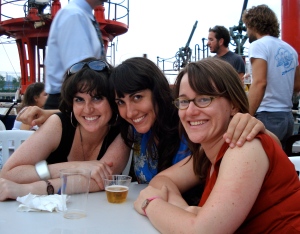 So after a few hours of enjoying the lovely company and lovely evening it was decided that the boat proper needed exploring.  I decided to brave the unhappily rocking waves and enter the Frying Pan.  Which is amazing: a big rusted mazey interior of old-fashioned boaty goodness.  Everything is old and rusted and dangerous and you can just sort of wander and evidently at night it turns into a ridiculous drunken rocking party, which, awesome.

I can imagine how creepy/fantastic this boat is when it is night time.  Also, evidently, there was a geocache hidden somewhere on said boat, so if you iPhone folks have geocache, get searching.

All the rocking of the boat sort of drained me of life, so I headed out fairly shortly after exploration and fun.  I decided that I wasn’t yet ready to climb back onto a moving object so I decided to walk from the Hudson and Riverside Drive all the way to the Park Avenue and 23rd street stop of the 6 Line.  Which is far, yes, but I stopped for some yogurt on the way to the subway and the walk enabled my head to calm down.  Also, the walk brought me to Madison Square Park where I saw an odd but charming solar-powered wifi floral set up installed by Prius.

A good night.  Only a few days left.  Ridiculous.  Go to the Frying Pan!  One of the coolest bar-type places I’ve experienced in this wonderful, charming, infuriating city.

One thought on “Out of the fire and into the Frying Pan.”