And I am back in Chapel Hill.  I am still working on catching up with the posts and the weekend and the return saga.  In the meantime, here’s the link to the podcast Brad and I recorded last week.  Enjoy!

Also, Jon made me a cake for my return, which is awesome of him.  Yellow cake with chocolate frosting, and a Wall-E candle, which is just infinitely fantastic. 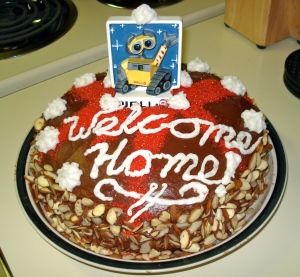 Last few days in NYC, and the parents are here to hang out for a bit.  This morning I woke up, readied the apartment, and spent some time reading near the park while waiting for my parents to arrive.  The day was absolutely beautiful: not too hot, blue skies, a breeze, low humidity.  Perfect.  I also took a photograph of the outside of my building, just because. 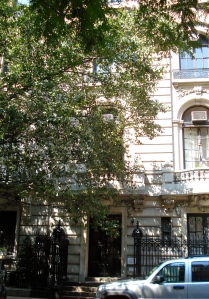 My parents arrived in a cab with, oddly enough, my classmate Nadja from Pine View c/o 2003.  Nadja is moving up to New York City and, oddly, is staying for a few nights in the building two doors down from mine.  Not kidding, how weird is that?  Anyhow, another Pine Viewer move to NYC.  We should just have our ten year reunions here.

The parents got settled in and I trekked them over to the Whitney for the obligatory “Hi Parents This is Where I Work I am Now Going to Try to Explain Conceptual Art to You” tour.  Which I think they enjoyed–the Whitney is a really excellent museum, small, manageable, easy to navigate.  I am partial to the institution for obvious reasons but still, Whitney love.  Also, major sadness to be saying my official last goodbye to the museum.  For now.  I’d love to work there again someday, fingers crossed.

We stopped at La Maison du Chocolat to pick up some macaroons and stopped at Saint Ambroeus, the local fancy Italian gelato place, for some gelato.  I had very pure, light-tasting peach and strawberry flavors, and also took a washed out picture of said gelato:

We spent the rest of the afternoon wandering down Lexington and doing a bit of gift shopping at Pylones and a bit of clothing shopping at Banana Republic.  We then headed down to 58th between Park and Madison to have dinner at Tao, which is best known for its giant Buddha and ridiculous scene.  There’s some food too. 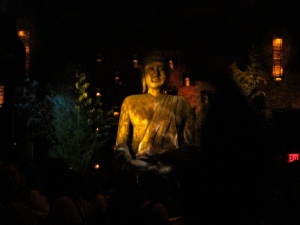 Tao was made famous by that episode of Sex and the City where Samantha has a brief bisexual fling with a Brazilian artist who refers to vagina as “the glorious puceta.”  The restaurant is extremely dark and extremely loud and extremely crowded but there is some great people watching: a combination of tourists, New Yorkers with out of town friends, and young i-banker douchebag types who wear too much cologne.  Anyhow, the restaurant was fun, the food was yummy and Asian fusion and plentiful.

The appetizers were fairly delicious and, as usual, better than the entrees.  Why are appetizers always better than entrees?  Also, I forgot to take a picture of the entrees before we massacred them, so the following two photos are definitely “after” shots.

We decided to forego dessert at Tao because we were stuffed and I convinced my parents that heading to Madison Square Park for custard from the Shake Shack was a better idea.  We did get little chocolate fortune cookies with our check.  These would have been nondescript, if not for the fact that the best fortunes ever were concealed inside the cookie.

We left Tao and walked from 58th down to Madison Square Park at 5th and 23rd.  A lovely walk: past the gorgeous windows on 5th Avenue, past the New York Public Library at 42nd Street, past the Empire State Building and to the Flatiron Building.  I love walking in this city, especially at night, when it is lovely out, and quiet, and all the familiar sights change.  Walking aimlessly, with no purpose or destination, is something that I will miss when I return to Chapel Hill.

We did, actually, have a destination on this walk: the original location of the Shake Shack for amazing delicious custard. Yes there was a line at 10:00 that looked fairly long.  Luckily said line was just for burgers, as there is a separate/short line for custard orders.  I had a  vanilla concrete (like a Dairy Queen blizzard but with custard) with toffee, chocolate chunks, and hot fudge, and it was rich and delicious and wonderful and the Shake Shack is such an extreme winner, seriously.

We then hopped a cab and returned to my apartment and attempted to settle in with three of us and many suitcases and much clutter.  Which is how we still are tonight, Sunday night/Monday morning.  I am mega-behind in blogging–tons happened today, and I will have to catch up when I return to Chapel Hill.  Yes, that is right, I return to Chapel Hill in about eleven hours.  I will hop a plane at La Guardia and then hopefully be back in North Carolina by mid-afternoon.  I have already rambled on about how this makes me both happy and sad (SO MANY EMOTIONS I DON’T KNOW WHAT TO DO) so I will spare you anything further.  Just expect some sort of New York wrap-up over the next few days as well as some announcements regarding the future of this blog.

Blog to you on the flipside, y’all.