After cleaning up from the earlier day’s rain my parents and I headed across the park to Kefi, Michael Psilakis’ Greek mega-restaurant on the Upper West Side.  Because the park is always lovely, and was particularly serene on this post-rainy evening, I had to take a few pictures:

We also stumbled upon some beautiful flowers near a fancy building on Central Park West. 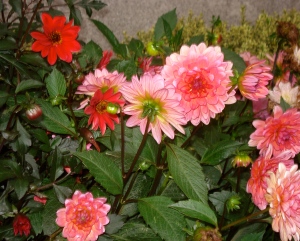 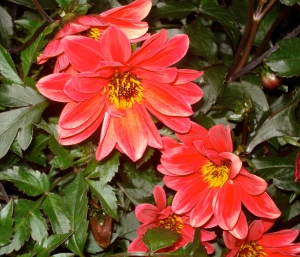 We met up with several of my amazing friends who helped make this summer super-fun for a rustic Greek meal at Kefi.  Which is huge.  Evidently the original location only sat about eighty people and did not take reservations or serve lunch.  So Psilakis and his business partner decided to move to a larger space that seats two hundred, takes reservation, and serves lunch.  And the place, from what I understand, is consistently packed.  I’d read fairly good reviews of the restaurant.  Frank Bruni complained that there was too much feta, too much salt, too much everything in the food but I personally have no problem with food that is unsubtle.

The restaurant is very, very large, and it seems that smaller parties get seated at big round tables downstairs.  Both upstairs and downstairs were loud, which I have come to expect from New York restaurants, so whatever.  We started off with appetizers; several of my tablemates ordered the white bean soup, Ashley had a Greek salad that looked like it might have been over-dressed in terms of vinaigrette (correct me if I am wrong) and I ordered a few appetizers for the table: the spreads platter which came with pita to dip in tzatziki, red-pepper hummus, an eggplant spread, and “caviar” which I believe was some sort of fish roe but was actually pleasantly salty and had the texture of a grainy hummus, an order of fresh-cut potato chips served with tzatziki (home made chips are always a hit) and the meatballs, which were large, salty-sweet, and came in a sauce that was liberally studded with giant chunks of tomato and cloves of roasted garlic (win).

For dinner I had the sheep milk’s dumplings which came in a sauce of tomatoes, pine nuts, lamb sausage, and something like a pound of spinach.  The dumplings themselves were fantastic: much lighter than gnocchi, like little happy pillows of creamy goodness, but I thought that the pasta-to-sauce ratio was not well balanced (too much sauce and not enough pasta to handle said sauce) and I found the amount of spinach overwhelming.  The flavors were great, I just would’ve liked more dumplings.

I, alas, do not have pictures of the other entrees (I didn’t want to be overly obnoxious).  My father had the branzino, of which he spoke highly, my mother had a shrimp and orzo dish, Theresa got the macaroni and cheese (which looked really excellent and creamy), Brad had the lamb shank and his comment regarding said lamb shake was: “That shit was awesome,” (thanks, Brad) and Phil and Ashley had flat pasta with braised and pulled rabbit.  I got a picture of that, and a taste.  The rabbit had clearly been braised for awhile, as it was extremely tender.  I have never had rabbit before and I can’t really say much of the taste of the meat, as, once again, it was swimming in extremely unsubtle sauce.  Still, Phil devoured his portion, so I’m assuming it was a win.

We opted to skip dessert at Kefi for a walk down to the Upper West Side Shack Shack and some custard.  Clearly my parents had enjoyed their first experience at the Shake Shack, and I was fine with one last custard run before I departed New York City.  I had vanilla with hot caramel, and didn’t take a picture because you can see one here.  Custard turned to conversation and ten 11:00 rolled around and we decided to roll out.  I bid farewell to my friends (sniff) and then headed home to finish packing and to get some sleep before my flight out the next morning.  It was excellent spending my last night in New York with food and friends–major thanks to the parents for enabling that to happen.