100th Post on the Dilettantista!  We must take a moment for this milestone, y’all!

Anyhow, I really missed cooking in NYC, strangely enough.  I’d begun to dabble in actual cooking just before I left for the city, but a summer in an unfamiliar apartment with an unfamiliar kitchen and no pantry sort of paused those attempts.  Now that I am back in Chapel Hill (with plenty of time to kill) I can attempt to cook a bit more.  Nothing fancy, mind you, just experiments in the kitchen.

Last night I decided to make stuffed mushrooms and a pizza on a baguette.  Actually Jon sent me the stuffed mushroom recipe and since the mushrooms called for fresh breadcrumbs I decided just to use the leftover baguette as the pizza base.  A bit of google searching led me to this Rachel Ray recipe.

This cooking excursion provided a few firsts: it was the first time I’d roasted whole heads of garlic (so easy! foil, olive oil, salt and pepper, forty-five minutes, done and delicious, I might have to do this every day) and it was the first time I’d made any sort of stuffing.  The stuffing, also easy.  I wish I’d taken some pictures of the garlic but what can you do.

The stuffing was the roasted garlic, some freshly torn breadcrumbs (in hindsight I should have torn them smaller, but they still got nice and crunchy), finely chopped mushrooms stems, parsley, a little butter and olive oil, and salt and pepper.  The stuffing was really excellent; I’d made a little too much for the mushrooms, so the leftovers were eaten straight from the pan.  Win. I used crimini mushrooms and in the future might look for mushrooms with a larger cap.  Or just modify the recipe and use portabellas.

The pizza was also easy.  I snagged a really lovely, fresh-baked (still warm, love it!) baguette from Whole Foods, sliced it in half, then halved it once more.  Actually Jon cut because I’m still not great with knives, though I did manage to finely chop mushroom stems.  The sauce was uber-easy: toss some grape tomatoes in olive oil, salt, and pepper, and roast them until they pop.   Mash said grape tomatoes with a head of roasted garlic. I hadn’t bought enough tomatoes so I thickened the spread with a bit of pre-made pizza sauce, but just a little.  Toast the french bread then spread said tomato-garlic mix onto the french bread.  Top with cheese of your choice: I had shredded mozzarella in the fridge and grated some parmigiana-reggiano over the top.  Stick in the oven for three-four minutes.  Remove.  Drool.  Eat.  Really easy y’all.  You can also sprinkle some parsley or whatever on top, it is up to you.

After dinner we decided to take a field trip to the way-out-in-Hillsborough location of Maple View Dairy for some rocking chairs and ice cream.  Maple View started as a dairy farm.  They make the best milk, and sell it at all the local supermarkets in glass jugs, which is so old-school and I love it.  They eventually decided to also make ice cream and opened an ice cream store by their farm (I think they used to give tours, not anymore).  They also have a location in Carrboro.  Now Maple View sells beef (check out the freezers in their ice cream store) and I saw vegetables for sale at the farm location. 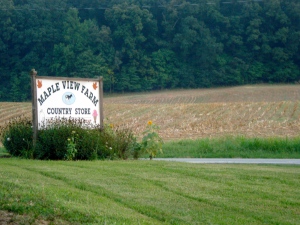 The ice cream is solid: creamy, fresh, simple flavors, with excellent toppings including a dark chocolate hot fudge for the chocolate purists out there.  They have sundaes and floats and a few specials a month, though I am usually satisfied with a scoop and some hot fudge.  I typically go for the Carolina Crunch, an uber-sweet flavor with lots of candy and caramel, but decided to try their cookie dough last night.  The cookie dough was good: creamy, and not overwhelmed with giant chunks of cookie dough.  Their hot fudge, as always, was stellar. 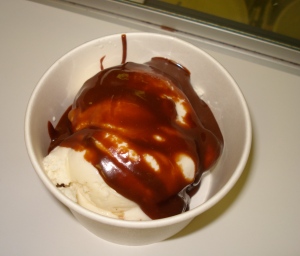 Also stellar?  Sitting on the rocking chairs on the porch and watching the sunset.  Always a win. 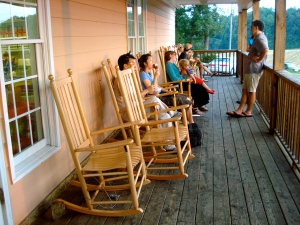 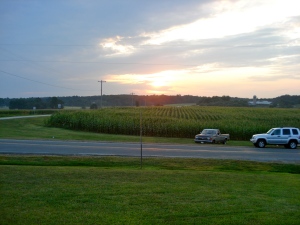