We left Grandfather Mountain and I quickly pulled out the Googlemaps directions I’d printed out in anticipation for minimal cell phone reception in the mountains.  The directions were really convoluted, with turns every other mile and a general lack of heavy-traffic roads.  This made me a bit nervous, but we decided to embrace the adventure and go with it.

The drive started simply enough.  We headed back towards Linville and then drove through Banner Elk, North Carolina, which was an adorable mountain town.  I was hoping to return and explore the town sometime during our trip, but we were so traumatized by the following journey that we never retraced our steps.  Point is, check out Banner Elk, it is cute.

We drove up and down a road with number of chichi developments and a private airstrip several times before finally finding our very mislabeled turn off.  I need to note here that we had absolutely no cell phone reception and, therefore, no way of re-mapping our route.  We turned onto Sam Eller Road and immediately felt a bit uneasy.  Gone were the chichi semi-city developments and the straight, level road.  We were going up, up, up a twisty, wooded mountain road and the homes and the people we saw were getting more and more dilapidated.  We pulled to the side a few times to stare at a map and a man in a truck stopped to ask us if we needed help, but he was the last “normal” person we saw before we turned onto…

Seriously, guys, we had to get onto this scary road called Dark Ridge Road, which so sounds like a horror movie.  The further we went down Dark Ridge Road, the more the residents looked like they were two-generations removed from the interbred hillbillies in The Hills Have Eyes.  We were in some mountains, somewhere, but I could not for the life of me tell you if we were still in civilization.

At one point Dark Ridge Road forked and it was such a horror movie moment, y’all.  We could either go to the right, which was a straight, well lit paved road, or to the left, which was a dirt road through the shadowy forest.  Unfortunately, our directions told us to go left.  We had a short moment of disbelief before we turned onto the long, rocky, dirt expanse of Dark Ridge Road.  This was a long, long, scary, interminable expanse of road.  I seriously expected to hear banjos at some point.  Naturally I took a few pictures: 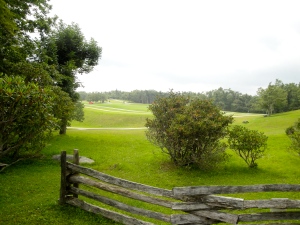 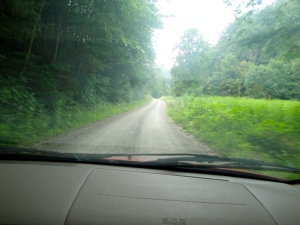 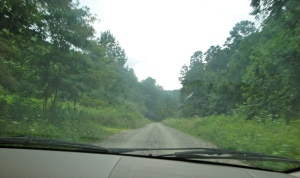 So at some point on this dirt road we crossed from North Carolina into Tennessee but I do not know when because nothing was marked y’all.  But, eventually, the dirt road turned into a paved road and I was mighty relieved, y’all.  Mighty relieved until we came to a giant closed-off area of road and a big sign that said “Detour.”  Disaster.

Well, semi-disaster.  The detour was mercifully short and we soon found ourselves back in semi-civilization.  Roads were paved and had signs and people didn’t look like they wanted to kill you as they passed you (I really wish I was exaggerating, but we drove past a few people who looked pretty annoyed to see two yuppy twenty-somethings in a red Honda civic cruising along their mountain roads).  We were soon crossing a bridge over the beautiful Lake Watauga and heading into Butler, Tennessee. This whole ordeal, by the way, only took a little over an hour.  It felt like forever.   I guess time goes more slowly when you are afraid of being captured and devoured by mutant cannibal hillbillies.

So, a quick note to the Googlemaps folks.  Please do not give travelers such as myself instructions involving terrifying and unmarked dirt roads through the mountains and the forests.  That is mean.  That is stupid.  Pavement is good, and so are signs.  That’s all I have to say.