Dragon*Con only strengthened my obsession with bronies because, man there were so many people in My Little Pony costumes running about!  I guess I need to watch My Little Pony: Friendship is Magic, stat. 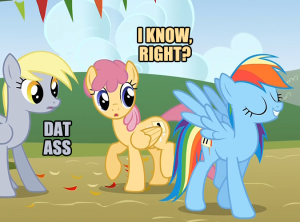 Anyways, io9 is reporting that John de Lancie, who played Q on various Star Trek series, is going to do some voice work on the show.

They even have some video clips, good times!

Evidently John de Lancie’s character is a “godlike” being who can “make things happen” which, you know, sounds like Q.  This is doubly amusing because Garrett Wang told a story before the Miss Star Trek Universe Pageant about “the Power of de Lancie.”  John de Lancie can also, evidently, make things happen.  For instance, stages collapse when he departs.  And if you invoke his name, positive forces will flow through your life.  Maybe I should start invoking the Power of de Lancie in my job search.

So after many fun times and shenanigans that lasted late into Saturday night (Sunday morning, technically) we didn’t really get out of the room until noon.  I once again donned my Blind Mag costume.  Jon and Marc went costume-less.  Oh, I forgot to tell a quick Jon zombie story.  We had a professional makeup artist across the hall from us who I ran into on Friday when I was getting dressed.  She popped into our room to borrow my tweezers and ended up adding all those gross vein details to Jon’s zombie look with my navy eyeliner.  So, new zombie makeup trick for Jon!  She also complimented me on my makeup which pleased me to no end. 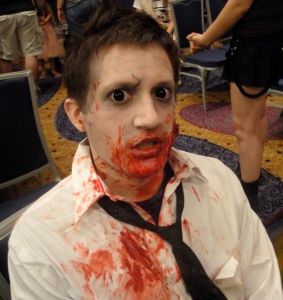 Anyways that was Friday, but back to Sunday.

So we hustled out a little before noon to go to a panel for Being Human, SyFy’s new hit show based on the BBC series of the same name.  I started watching the show about a vampire, a werewolf, and a ghost all sharing a house earlier this year and found it to be a far better show than I expected.  All three of the leads were on hand for the panel and it was great to see that they legitimately liked each other.  We arrived a little late to the panel but an enjoyable time was still had.  Especially when the actors started tearing up the stage to demonstrate that they were, indeed, having a fun time at Dragon*Con.

Then, you know, the lunch thing happened.  I realize we only did four panels all weekend; usually I’m fairly panel-heavy at Dragon*Con, but this year with the parade and the photo shoots I just found myself re-prioritizing.  We have luckily seen all the Starfleet Captains in person (minus the guy from Enterprise, who doesn’t count) and we’ve hit a lot of the shows and casts we’ve wanted to in the past, so we didn’t feel like we missed out this year.  I still got my Con on, just in a slightly different way.

END_OF_DOCUMENT_TOKEN_TO_BE_REPLACED

So after showering, changing, semi-napping, spending a few hours watching Dragon*Con TV and then putting my Melisandre costume back on I headed out to the Marriott for the 4:30 Game of Thrones photoshoot.  Jon and Marc decided to attend the 4:00 Star Trek: The Next Generation panel with Brent Spiner, Gates McFadden and Wil Wheaton.  I saw Brent Spiner last year and had seen Wil Wheaton the day before–don’t get me wrong, Dr. Crusher is great and all, but I really wanted to meet some like-minded George R.R. Martin fans.  Also, remind me to tell you my friend’s Brent Spiner story one day.

The shoot was held on the 10th floor of the Marriott, a big, loungey space with plentiful windows and natural light.

A ton of Game of Thrones costumers showed up, representatives from many houses, and we had a fairly long photoshoot with many “reenactments” of scenes from the books and the HBO shows.  I’ll try to keep this as spoiler-free as possible.