So after showering, changing, semi-napping, spending a few hours watching Dragon*Con TV and then putting my Melisandre costume back on I headed out to the Marriott for the 4:30 Game of Thrones photoshoot.  Jon and Marc decided to attend the 4:00 Star Trek: The Next Generation panel with Brent Spiner, Gates McFadden and Wil Wheaton.  I saw Brent Spiner last year and had seen Wil Wheaton the day before–don’t get me wrong, Dr. Crusher is great and all, but I really wanted to meet some like-minded George R.R. Martin fans.  Also, remind me to tell you my friend’s Brent Spiner story one day.

The shoot was held on the 10th floor of the Marriott, a big, loungey space with plentiful windows and natural light.

A ton of Game of Thrones costumers showed up, representatives from many houses, and we had a fairly long photoshoot with many “reenactments” of scenes from the books and the HBO shows.  I’ll try to keep this as spoiler-free as possible.

Once again, if you click on the pictures they’ll get all big and detaily.  So as you can see there were lots of us and we even had a Tyrion and a direwolf!  Well, a part-wolf service dog but, you know, she was adorable.  This was my first photo meet-up and everyone was super nice and looked super awesome.

Jon met me toward the end of the meet-up (he didn’t make it into the Star Trek panel, alas) and he had zombified himself and was therefore dripping stage blood and disgusting.  We tried to catch an elevator back to the bottom of the Marriott, but the elevator situation is so dreadful that we ended up taking the stairs down.  The impossibility of getting an elevator at the Marriott is one of several reasons why I do not stay there during Dragon*Con.  We passed a number of people in the stairwell and I’m pretty sure Jon gave a few of them heart attacks.

We detoured to the Exhibitors Hall because I wanted a pet dragon.  I’d seen them in the hall the day before, but my policy during conventions is no impulse buys.  If I am still thinking about the item the next day then I can go back and reconsider.  A number of the Daenerys cosplayers at the Game of Thrones shoot were sporting these dragons, and so I decided to go get myself a little souvenir.  They are polyurethane and you can bend and pose then in various ways, particularly around your wrist.  I got a little red and black one with a face that resembled Toothless from How to Train Your Dragon.  They are very cute, here’s the website!

And here are a few more photos we took around the Marriott right after the Game of Thrones shoot:

We grabbed dinner and once again ran into my Stormtrooper friends from the Wisconsin Garrison of the 501st.  They took some pictures of my red contacts (this is the first time I have ever wanted my eyes to look redder in photographs) and we chatted about FX contacts for a bit.

We took our dinner back to the room to rest up a bit for the night and to collect Marc.  More Dragon*Con TV was watched, of course, including the replay of the parade.  So I actually did get to see some of the parade after all, which was nice!  Unfortunately the close-up they got of me involved me wiping some sweat off my face and breathing out a heavy sigh–but I did smile and laugh a bit afterward, so my five seconds of fame were only mostly unflattering.

Oh I also changed my shoes.  I was wearing these boots with an extremely low heel that I’m usually semi-fine in, but they were just killing me this year.  So I put on some open toed flats.  Problem solved.  I do not understand how these girls who traipse around Con in high heels do it, but I’m much happier when I’m running around in flats.

We headed back to the Marriott/Hyatt area and, after getting me a DQ Blizzard (the perfect food y’all) spent awhile hanging out in the gorgeously redone Hyatt bar.  I chatted with three gentlemen from Greenville, SC, all of whom had non-nerd girlfriends/wives.  I showed them some pictures of my Blind Mag costume and then some pictures of myself in my normal clothing.  I love breaking the nerd-girl mold, as I am usually 100% put together and perfectly made up and coiffed.  It isn’t until I start talking about uniform differences between each of the Star Treks or my collection of Vertigo comics that my true nature is unveiled!  Bwahahaha.  Etc.

I detoured down into the basement of the Hyatt to get another photo for my scavenger hunt: a group of FILKers.  FILKers, from what I understand, are folk singers who prefer particularly “nerdy” topics.  The word “folk” was misspelled as “filk” at a convention long ago and the FILKers decided to stick with it.  According to my Dragon*Con schedule the FILKers were having “open filking” at a room in the lowest level of the Hyatt, so I decided to check it out.  Evidently they were used to photo scavenger gawkers such as myself (I have to admit I would never have sought out the FILKers were it not for the scavenger hunt, but that was the goal of the list, to expose us to fandoms we wouldn’t ordinarily explore!), as they offered to pose and were extremely friendly. 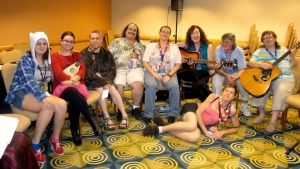 I wandered back upstairs to collect Jon and Marc (my Greenville friends had departed in my absence), but Jon was in the men’s room.  So Marc and I had a long, long conversation with an Atlanta police officer about Dragon*Con security logistics.  I mean, these things happen.

Finally Jon rejoined us and we headed off to the Marriott.  We immediately ran into Timmy–who we had met and had a long, long conversation with outside of the Sheraton (these things happen)–and his boyfriend Billy.  They shared some of their booze and I shared some of the glowstick bracelets I had stuffed into my purse.  And this was the start of a mildly bizarre but extremely fun night.

I was dead set on finding more photos for the photo scavenger hunt and Jon and Marc were enthused to be socializing with new friends.  We decided to head to the Last Night of Alderaan Party (the Star Wars themed party for the uninitiated) where I was positive I would find three Slave Leias to photograph together.  For some reason Slave Leias were in short supply this weekend, maybe Carrie Fisher scared them all off.

So I sort of wandered off from my group at the Last Night on Alderaan party.  I was dead set on finding me some Slave Leias.  But you see, y’all, it was really dark.  And there were lots of people.  And some good music.  And the only light available was from all the lightsabers waving about.  And the next thing I know my friends are gone, y’all.  And I hadn’t even found a single damn Slave Leia. So what did I do?

Well, after a bit of deliberation and starring at my phone and texting, I decided to dance.

This med student (he was probably 22) asked me to dance, so I danced with him to David Bowie’s “Magic Dance” (this is Dragon*Con guys, get with it) and then I gave him and his friends some glow sticks, and then I decided to leave to find my friends.  Oh and also I left because I’m always afraid I’m leading guys on when I dance with them, which probably isn’t the case because I am not a particularly sexy dancer, but who knows.  Anyways, I bid farewell to my new friends (and gave them some more glow sticks) and then decided to try to find the rest of my group.

The Marriott, you see, is a large and crowded hotel, and there are many costumes and many people and much alcohol and it is generally a fun, sexy time.  So after a lot of texting “Where are you?” and receiving “The Marriott” in response (NOT HELPFUL) I decided just to go with it and to meet new people and have me some funsies.

Luckily that is so easy to do at Dragon*Con!  People are mega-friendly.  I met some incredibly chatty zombies.  I met a guy who was attempting to sell his sci-fi book.  I briefly attended an Abney Park concert.  I fell into the lap of some Hasidic Blue Men and a Rebel Pilot Mickey.

I also met a great Barbara Gordon at Oracle and a Batgirl.  Check out the eskrima, nice detail.

So around 1:30 I pondered going over to the Hyatt to catch the Rocky Horror Picture Show shadowcast.  Jon eventually ended up tracking me down at the Hyatt and escorting me back to the Sheraton.  So, while it is difficult to find people at Dragon*Con, it isn’t impossible.  Jon and Marc had evidently had lots of fun with Timmy and Billy, so new friends were made by all.  (And now Timmy and I are Facebook buddies, hi Timmy!) That’s Dragon*Con.  These things happen.

2 thoughts on “Saturday at Dragon*Con 2011, Part II, Glowsticks and Glitter”