I totally forgot to add pumpkins to my list of fun Halloween stuff, so during Halloween Month Sundays will be Pumpkin Sundays.  I’m starting things out with lots of random, funny pumpkins culled from around the internet:

These are all from the website ExtremePumpkins.  The links below each photo take you to the page which has tutorials on that particular pumpkin.

A pumpkin carved with pig’s ears and parsnips. Presumably you could use something other than pig’s ears for the creepy goblin ears.

Carrie at the Prom, post pig’s blood (love it!). 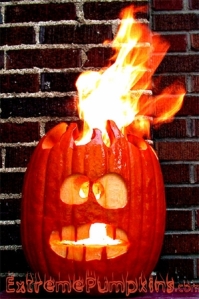 I love this one: territorial pumpkin on a rampage.

I know it isn’t Martha Mondays yet, but I love these two pumpkins by her:

Fanged pumpkins!  They are one of Martha’s new pumpkin ideas for this year and I think they are awesome, and a great way to decorate smaller pumpkins!

Pumpkins are already on sale in the supermarkets, although I usually don’t cave my pumpkin(s) until around the weekend before Halloween because of that whole issue with items rotting etc.  Still, these are all great ideas if you are trying to figure out your pumpkin carving for this year!