Once again it is Wednesday, and once again it is time for another amazing Work of Art episode and a hopefully amazing Work of Art liveblog.  Just a refresher: last week we our fourteen contestants were now thirteen, and they still had names like Sucklord and Jazz-Minh (ungh), and the contestants weathered their second challenge.   Oh also, Jeanne from last season was the guest judge, I love her.  The artists had to create exhibits based on movement as embodied by Parkour.  Bayete won with his simple yet moving video piece, and Kathryn lost with her stagnant, academically limited video piece.  Also, ugly crying.   Farewell Kathryn,  you may have looked like Lisa Loeb, but your ivory tower ramblings and overuse of the phrase “visceral tableau” (and ugly crying) were dreadful.

This week the artists are tasked to create a piece of POP (yes, they spelled POP in all caps in the episode summary) art that reflects current popular culture.  I’m guessing they’ll be going to visit the Andy Warhol sculpture near Union Square?  Let us get to it!

9:00:  Heeeey we’re back!  Guess who just had a big margarita?  THIS GIRL.  This will be awesome.  The survivors trickle back to the loft and recap the critique for those who did not see it, I basically recapped it above, so no worries y’all.

9:02:  Michelle talks about how being in the top two for two times in a row is making her nervous, because she could just as easily be in the bottom.  Suxor.  Anyways, everyone’s on their way to Simon’s gallery on Park Avenue.  I’ve been by there!  Young Sun says it is like going to the house of royalty.  When they get to the gallery they have a line of tin cans to follow.  I’m guessing this is their ANDY WARHOL INTRODUCTION?!

9:03:  OH SNAP IT IS.  The artists arrive in a room filled with blank tin cans, with an Andy Warhol Campbell’s Soup Can canvas hanging in midair (seemingly).  Sarah K. is all “Oh wow I’m seeing it in person” (which, girl, come on, Andy’s art is all about reproduction so he doesn’t really give a shit whether or not you ever saw it in person) and Young Sun is all “my last piece was inspired by Andy.  Of course.

9:04:  POP IS BOLD.  POP IS BRAVE.  POP IS SEX.  POP IS LIFE.  POP IS FRESH.  POP IS POLITICAL.  SO MAKE IT POP.  Simon said all that (of course), right after China, in a weird turquoise jacket thing with giant black dots, tells the artists that their task is to make a pop art piece.  Oh goody, this should be awesome.

9:05:  Utrecht Art Supplies!  The budget for each artist is $150.  Jazz-Minh doesn’t know pop culture, because she’s a HIPPIE.  The Sucklord is going to make a giant piece about Charlie Sheen, complete with tiger’s blood and warlock dust.  He also needs Lola to pose naked for him, because he needs a naked sexy lady.  Okie dokie.

9:06:  Young Sun and Dusty and Tewz discuss their feelings on pop art.  Tewz feels that he could be a contender to win because he loves Nintendo and Mutant Ninja Turtles.  He’s making a Fad-X truck, which will ship in pop art, that could be funny.  It will probably be awful. Kymia believes that pop art is about art that sells you something; she’s making an environmental piece about water bottles…

9:07:…And she’s photographing herself naked for it!  Lots of boobies in this challenge y’all.  Dusty’s going to do a piece on fast food, because his dad has had heart attacks, and because he lives in Arkansas and I guess they only have fast food in Arkansas?  I don’t know y’all.

9:08:  Sucklord is attracted to Lola, despite having a girlfriend, who will cut his balls off if he says something about being attracted to Lola, which he does anyways.  He does not, btw, photograph Lola naked.  I guess I misunderstood. Leon decides to do a picture of American countries sort of juxtaposed against an American flag.  He does it on glass.  Pretty.  Jazz-Minh is doing a piece based on Brittany grimacing for the papparazzi.  She’s going to base it on Warhol’s Marilyns.

9:09:  AHHHH JAZZ-MINH HAS ONE OF THOSE SCARY INSIDE LIP TATTOOS.  HERS SAYS “BITE ME”.  SHE SUCKS SO MUCH.  Her sister’s evidently says “epic as fuck” and so she got her stupid inner lip tattoo as a show of solidarity.  I hate Jazz-Minh so much y’all.

9:10:  Michelle, who says her art isn’t really pop at all, is painting a bunch of Coca-Cola cans.  She asks “is this too derivative” and everyone, including me, is all “YES THIS IS DERIVATIVE.”  Girl.  Commercial break y’all!

OH MY GOD GUYS I JUST HIT UPDATE AND IT DIDN’T SAVE, SO I LOST EVERYTHING BETWEEN COMMERCIAL BREAKS.  I WILL TRY TO RECAP DURING THE NEXT COMMERCIAL BREAK BECAUSE I LOVE YOU ALL.  I am mad at my blog now though, however.  Ungh.

END_OF_DOCUMENT_TOKEN_TO_BE_REPLACED

On Friday night the Scrap Exchange, which is still doing awesomely in its new space at Golden Belt, opened the exhibit An Offering: La Ofrenda.  The exhibit is a series of Dia de los Muertos (Day of the Dead) altars created by Durham artistic community members.  The exhibit, which runs until November 12th, is meant to be collaborative, people can bring photos and mementos of loved ones to add to the altars throughout the show.  Some of the altars are quite beautiful and moving. 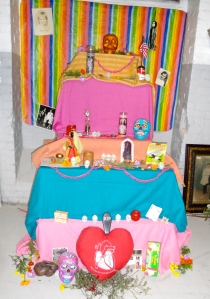 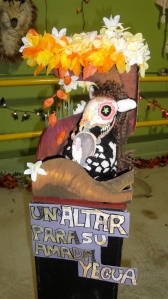 Saturday we threw on our best stage blood and joined the undead at the Raleigh Zombie Walk.  While it was not the best-organized event of all time, it was pretty fun.  Approximately 200 zombies clustered around the acorn at Moore Square and at 7:00 we started lurching around downtown Raleigh.  I’m not sure what route we took (I don’t know downtown Raleigh all that well) but I know we went by the Capitol Building where we saw some Occupiers (who looked a little worse than we did, eek!) and we also shambled past Beasley’s Chicken and Honey on Martin Street.