I actually really love Mardi Gras.  I like big commotions and shiny things and excuses to dress up and have fun.  I’ve even been to Mardi Gras in New Orleans twice, I had a friend that went to Tulane and I made sure to take advantage.  HERE ARE SOME PICTURES: 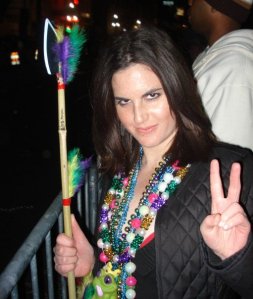 So like I said, Durham got really into Mardi Gras this year!  And I was all about it! After work Jon and I headed to the Fullsteam/Motorco area, where parties were starting and where a million food trucks were lined up.  And by a million I mean like seven but WHATEVER GUYS, Fat Tuesday means that the short rib quesadilla and duck fat tots from Ko Kyu food truck (I wrote about it in this post from last summer)  are 100% justified.  Jon and I hung at Fullsteam a bit, eating our food truck food and drinking some Fullsteam beer.  Well, I don’t like beer, so he drank the beer.

ALSO, Fullsteam had several King Cakes for the taking.  King Cakes, for those of you who don’t know, are these danish-tasting, sugary concoctions with icing in the shade of Mardi Gras colors and also some sprinkles.  Each King Cake has a little plastic baby in it, and if you get the baby you win luck and fortune and good things.  So Fullsteam had a bunch of King Cakes cut up and you could just take a piece. And guess what y’all, I GOT THE DAMN BABY:

I mean I don’t even like King Cake, guys, I really just grabbed a slice at random to see if I could maybe get the baby (heh, that rhymes) and I totally got the baby.  Because I got the baby I won a pint of Fullsteam beer, which I naturally gave to Jon because I don’t drink beer.  Anyways, not a bad way to kick off the Mardi Gras evening!

We walked from Fullsteam over to the plaza in downtown Durham with the big awesome bull and its giant balls (I love this statue), where people were massing for a Mardi Gras parade that would be led by the Bulltown Strutters, a sort of paradey band with lots of brass and drums and like, good things.  I’m not entirely sure how to describe them but they were really, really, really good.  The parade was set to start at 7:00, and by quarter til the plaza was starting to fill up.

I know, my camera sucks at night, but look!  People were in costume!  People had beads! In carts!  The Mardi Gras spirit is alive and well in Durham.  And then the Bulltown Strutters happened, and they were great guys they were.  They came to the plaza, they played some music, and they led us off on our jaunt down to the Motorco/Fullsteam area.  Parade, guys.  I love parades. 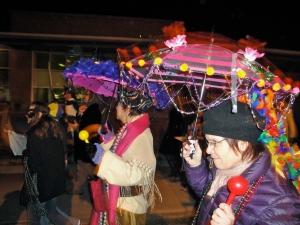 Since this was the first year the parade happened there wasn’t exactly a parade permit–we sort of sidewalked it and also went into the street a bit and yes, we stopped traffic (oops, sorry cars, at least we’re entertaining right?). This was very much an “anyone can play!” parade and Jon and I happily joined.  Tons of people in costume and tons of people with instruments and generally a feeling of profound happiness and also spontaneity.  I just loved it, it reminded me of the random, non-official Mardi Gras parades I caught in smaller neighborhoods in New Orleans and it also felt so perfectly Durham.

The parade ended at the Fullsteam/Motorco area on Rigsbee, and the Strutters filed into Fullsteam.  And more music and revelry happened: 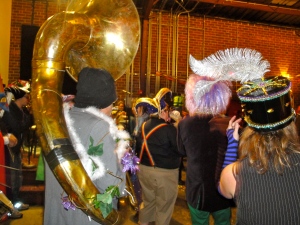 I’d picked up some adorable, decorated drink umbrellas from a generous person on the parade route, and I saw this little girl in a Belle costume eyeing them.  I gave them to her–unfortunately I didn’t get a photograph of the umbrellas before giving them to her, but I promise you they were cute.  And I promise you that this girl’s reaction was totally worth it, she was so happy!  (Also, her mother gave me her card, she’s a baker, and her company is called Sweet Arielle Bakery, and it looks like she does macarons?! Want. Now).

Anyways this was SO. FUN.  We didn’t stay out too late because, you know, work night and work tomorrow and all that.  I really hope that Durham does this again next year, if so I plan on coming in costume and with masks and lots of beads! Here are a few final links to make you happy:

The write-up of the event from the Herald Sun (the only reporters faster than I am are actual reporters, I saw this guy at the site actually speedy dude).

A video I took of the Bulltown Strutters.

And another video I took of the Bulltown Strutters.

3 thoughts on “Durham Does Mardi Gras”