I’ve posted about Third Fridays in Durham before, they are always happening events, especially down by Golden Belt.  This past Third Friday was the Liberty Arts grand re-opening.  Liberty Arts is a metal foundry and iron-working studio that was a Durham institution, until a set of violent storms last year caused its roof to collapse.  Liberty Arts decided to move from its location near Central Park to a fantastic new space in the Golden Belt facilities.  Their grand opening celebration on Friday drew a huge crowd. 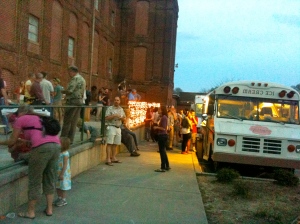 A number of food trucks, including The Parlour, Pie Pushers, and Only Burger, were on hand to keep everyone fed.  The weather was unbelievably nice for mid-March, so tons of people were sitting outside. 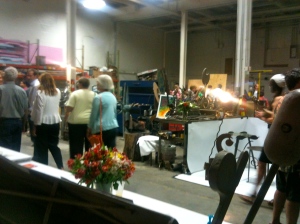 Lots was happening inside Liberty Arts: glass blowing, metal working, and other demonstrations.  The artists also had lots of pieces hanging around to look at. 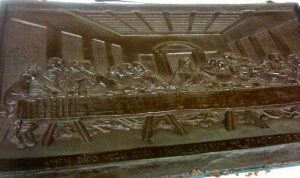 I particularly liked this big wax mold of The Last Supper, I thought it looked like a big chocolate bar.

Durham’s own Luchadoras, the group of female masked wrestlers in the Mexican Lucha Libre style, were on hand in black evening gowns and sparkly masks.  I saw a bunch of them roaming around the Golden Belt area, they weren’t there to wrestle, I think they were just enjoying a night on the town.