Passover was about two weeks ago, and I suggested to my parents and sister and grandmother that they all come up to North Carolina, where my uncles and I live, and we all do Passover up here together.  I’ll do one night, I naively suggested, and my uncles would do another.  Somehow everyone agreed to this idea, and that’s how I found myself with the task of cooking the first night of Seder on a Friday night in early April.

I’m not going to bother explaining the terms Passover and Seder.  Other people have done it better than I can.  Just Google it.  I’m hoping that most of you know what these things are anyways, but I’m always surprised by how many people have never met a Jewish person, or how many people know nothing about Jewish culture.  What can I say, I grew up in Florida.

Anyways, doing Passover Seder is sort of like doing any other dinner party (which I have done), except not really.  Because you have to time the multiple courses of food to the end of the saying of various prayers and the reciting of various stories and the hopefully having of various discussions.  So you never exactly know when that food that is warming in the oven and hopefully not drying out at all will be served, because a Seder doesn’t really have a set end time.  Also, did I mention the multiple courses?

Anyways, I was doing just fine in my cooking of the food, and then my sink garbage disposal broke, and my sink started clogging, and that’s when my family arrived.  So that was fun!  Regardless all the food turned out just fine, and everyone seemed happy.  From what I could tell.

So here are some pictures of my family (maternal side only) assembled at my small-ish apartment for the first night of Seder.

An here are some pictures of my mother and uncles misbehaving themselves during the Seder. 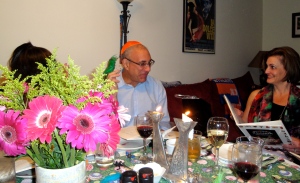 That green thing my uncle is holding is one of our 10 Plagues, we’re all about fun representations of serious happenings.

And here is my dad, being exasperated by our relative’s antics.  That white thing he is wearing is a kittel, you probably remember me talking about it back in my post about Raffi and Rachel’s wedding. 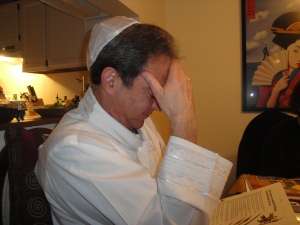 Anyways, onto the food.

I used this brisket recipe from Shiksa in the Kitchen.  I’ve never made a brisket before, but I think I was pretty successful!  The brisket was tender and flavorful.  Here’s a money shot. 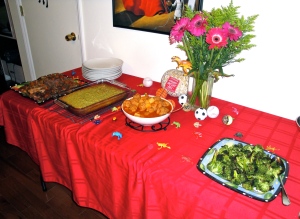 My uncles had second night of Seder, and one of their guests was a Holocaust survivor.  Well, escapee–his family was able to flee Germany in the late 1930s after his father spent a thankfully brief two weeks at a concentration camp, and then the family was able to get onto the last boat out of Holland to America.  Quite a moving story to hear during Passover; we were very lucky to have him at the table! 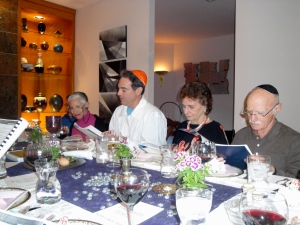 And that was my Passover!  I hope you had an enjoyable too.  I’ll post tomorrow on how I broke it–a few hours early–with a very not Kosher sandwich in New York City!