We interrupt your regularly scheduled broadcast of ALL DRAGON*CON ALL THE TIME to bring you this guest post I did on the Durham arts scene  for my friend Jamie’s blog, The High Heeled Traveler.

Jamie and I met in the undergraduate art history program at the University of Florida, where we bonded over our shared fabulousness and love of shoes and Fragonard. 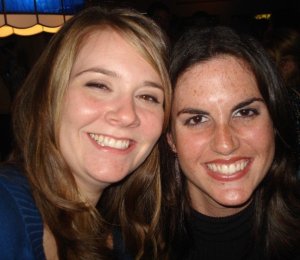 Lookit us, we were definitely in college.

Since college Jamie has lived in NYC and D.C., working at places such as Sotheby’s and the Corcoran Gallery.  Nowadays she’s a freelance writer and blogger, and she chronicles her love of fashion, food, art, and travel on her blog.  So, go check out my article, and then stay awhile to read more about Jamie’s adventures, I promise you’ll have a good time!

Thanks, Jamie, for letting me have some space on your blog!

I saw the Extraordinary Contraptions at my first Dragon*Con, when they serenaded those of us who were waiting in line to get into the Time Traveler’s Ball on Friday night. 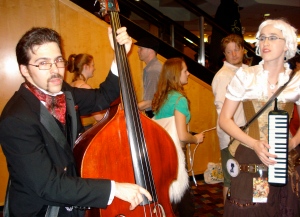 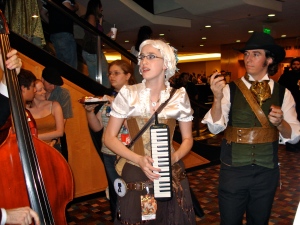 SO STEAMPUNK am I right?  The lead singer (WHOSE NAME IS SEPHORA, LIKE THE MAKEUP STORE, AMAZING/RIDICULOUS) is playing some sort of like combination of a piano and a recorder.  Check out their Dragon*Con profile, they use phrases like “Dimension-spanning stories of steam and strife” and “aural anachronisms.”  You probably know them from their “I’m on a Blimp” music video that, once, played four times in a row on Dragon*Con TV.  FOUR TIMES IN A ROW:

So, The Extraordinary Contraptions are Atlanta-based, so props to Dragon*Con for supporting the local talent.  Here is some more of their Steampunky music:

Is it just me, or are there a ton of Steampunk bands this year?

One thumb up.  They get points for nostalgic reasons!