This recap covers Friday at Dragon*Con 2012–click here if you want to read about Thursday!

Friday morning I woke up and watched John Barrowman and Kai Owen‘s panel while dressing in my Blind Mag costume.  John Barrowman was so unbelievably charming, guys.  I want to be his best friend.  I love DC*TV (when it works) because it lets you maximize all your Con time.  Sure, I was in the hotel room, but I was watching the panel, laughing along with the panel, and being jealous of the beefy Spartan that John Barrowman ran his hands all over.  Siiiiigh.  All the good ones, right?

Anyways, as soon as I was dressed I headed out…and ran immediately into this amazing Nicholas D. Wolfwood from Trigun (above).  I spent much of the first part of Friday ducking into a panel or two (notably the Battlestar Galactica panel with Katee Sackoff love me some Starbuck!), grabbing some lunch, and taking tons of pictures: 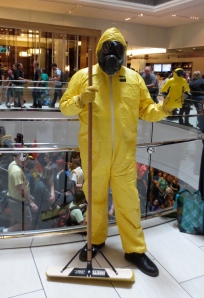 This was a big latex reptile suit thing that I only saw out once–the rest of the weekend it was in a little wooden box/cage.  This thing was amazing. 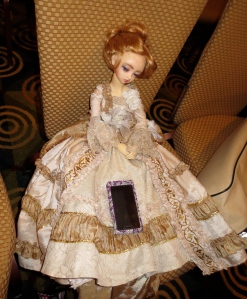 These were just a few of the many My Little Pony costumes I saw throughout the weekend.

And then I saw Dani (you’ll see a lot more of her in the photos from Game of Thrones shoot I participated in on Sunday) in this FANTASTIC Illyria (from Angel) costume. 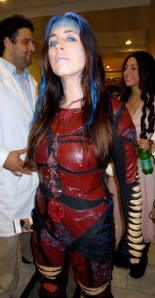 Seriously, look at how great she looks!!!

I just loved this Green Lantern Jedi.  How cool is he?

After a bit of wandering around I ducked into the Exhibitor’s Hall.  While strolling the booths, this gentleman chased me down for a photograph.  His name is Larry Elmore, and he has made a successful career and life for himself creating fantasy art for book covers, playing cards, and tabletop games such as Dungeons and Dragons.  Larry paints “witchy women,” and he wanted me to pose for him, as I fit the bill.  I was so flattered!  He shot a few pictures of me, and then we took the picture below together.  Larry had a huge booth with a lot of merchandise–I told him that he’s so lucky that he gets to do what he loves for a living, and that he is so successful at it!  He just grinned and said, “I know.”  What a lovely, lovely man! 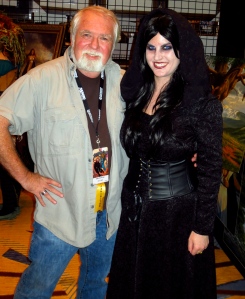