Guys!  I’m so sorry it is taking me forever to get these recaps done.  Here is what I have done since Dragon*Con:

—Bridal shower in Charlotte (the actual wedding is this upcoming weekend).

—CENTERFEST and all the insanity at work that it necessitated.

—Rosh Hashana (which involved traveling to be with my family…Yom Kippur is this week but I’m not traveling for it).

–A wedding in Boston.

So it has been pretty intense and busy in the life of Lindsay this September, as you can imagine, and it hasn’t left me much time for involved blogging, I apologize!

And these have been my Saturdays since Dragon*Con:

–Bridal shower in Charlotte (so Southern!)

–Wedding in Boston (I’ll post about that sometime soon, likely in October).

Pretty different from a Saturday at Dragon*Con, am I right?

So above are a few shots from the Game of Thrones shoot that occurred right after the Dragon*Con parade.  I marched in the parade last year, but I decided to sit out this year because heat, early, costumes, heat, etc.  Not a decision I regret, although marching in the parade is fun and I suggest everyone do it at least once during their Dragon*Con lifetime, because it is a worthwhile experience.  Still.  Hot.

Anyways, I missed most of the photo shoot, but I got a few shots, and it allowed me to get into my Melisandre costume for the first time:

For the night is dark and full of me!!!  I LOVED this costume and am so thrilled at how well it turned out!  (Here are a few more photos just in case you wanted to see them!)

These photos were taken at the Hilton around lunch time, so afterward Jon and I navigated to the Peachtree Food Court for lunch.  Or, we tried to.  The crowds, y’all!  The crowds!  The crowds at Saturday around noon in the Hilton and Marriott were unlike anything I had ever seen, and I was just miserable, because every time someone bumped into me, the giant neck piece I was wearing would stab into my neck.  I usually have at least one moment at Dragon*Con when the crowds combined with whatever insane costume I am wearing become too much and I sort of go into uber-bitch mode.  So, just assume I wasn’t a happy camper for awhile…I got over it eventually, I promise, but it did involve taking off the necklace at one point.

Anyways, here are some pictures taken from before and after the insanity.

Buttercup and Wesley in the food court. 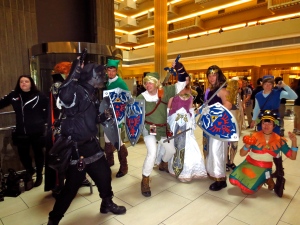 Two Melisandres and a Sansa!  I love that she did the seated horseback Melisandre. 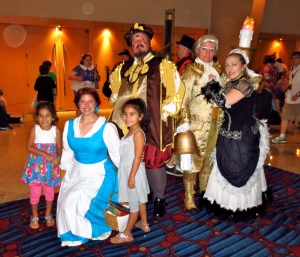 Beauty and the Beast group.

Jon went to the Chessex booth in the Exhibition Hall to get some game die, and I sort of lulled around and took some more photos and tried not to be annoyed by getting bumped into with my necklace on.  And then I saw this Companion Cube dress and Turret costume from Portal.  And I felt a little better. 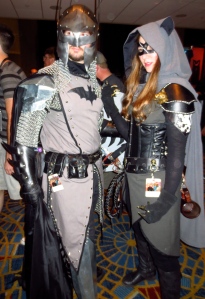 Also, these fantastic Medieval-style Batman and Catwoman (these are the same costumers who did the Portal cake-head and cube-head that I saw on Thursday night).

We headed back to the Sheraton to catch a Star Trek: Voyager panel with Garrett Wang (Harry Kim), Tim Russ (Tuvok), and Robert Picardo (The Doctor).  When we sat down in the panel I did something I’ve never done in public at Dragon*Con:  I pulled a drag queen and tore off my wig.  DISASTER.  I ended up putting it back on after a few minutes because I felt ridiculous.  And also because I wanted to have the wig on to get some TARDIS pictures with the TARDIS that lives outside the Sheraton ballroom during Dragon*Con.

Did I mention how happy I am to have finally watched Doctor Who?  I felt like I understood so many more costumes this year, it was great!  Also Jon’s costume, in case you were wondering, was Dr. Doug Rattmann, aka “The Ratman,” an Aperture scientist who got stuck in the testing rooms and went nuts–he drew all the crazy amazing “The Cake is a Lie” illustrations that pepper Portal.  Jon walked around with a clipboard and paper and drew people images of cubes and cakes and GLaDOS, it was a fun costume!

After the Voyager panel we headed back upstairs so I could change into a more comfortable and crowd-friendly costume (aka my Companion Cube dress).  The Melisandre costume is 100% fabulous but it is just extremely hard to walk around in, as the dress is fragile and the necklace isn’t precisely crowd-friendly, so I decided to reserve the costume for the Game of Thrones photo shoot I had planned for Sunday.   Some fabulous photos resulted from that shoot–I’m excited to show them to you in my next post!

But, for now, more photos from Saturday! 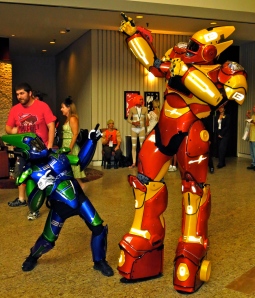 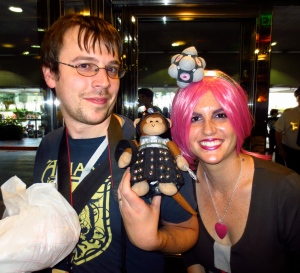 I found Dalek Timmy, which means I found both of the Timmys wandering around as part of the Dragon*Con Photo Hunt (which I did not win blergh, once again, maybe next year!).

We saw this incredible costume in the food court–I have no idea what it is.

We also saw this young GLaDOS, who was adorable.  Evidently there was also a man dressed as an Aperture Scientist, walking around with a functional GLaDOS puppet-arm that moved and talked to you–I didn’t see him, but how cool is that?!  Jon’s displaying one of his Ratman pictures, just in case you were wondering.

I loved this woman’s dress–all the toys!

If you gave this Zoltar a dollar, she’d give you a fortune.  Someone fed the machine a dollar while I was standing around; his fortune was “Two by Two, Hands of Blue.”  Clever, right? 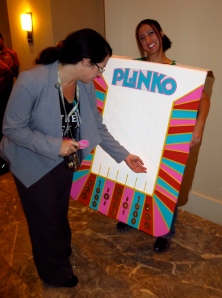 Lots of Doctors!  I needed three different Doctors for the photo hunt.  I stood around with two Doctors until a third walked by, and then I GRABBED him, and then my camera battery died, which is ridiculous, but luckily I had another battery on hand.  So this photo happened.

This was amazing!  CLEVER GIRL!

I’m so thrilled I saw the Drag Disney Princesses!  I thought they were an urban costume myth!  Not really, but still, fantastic to see them, they were so hilarious!

Seriously, check out the Tinker Bell.

Okay, I know what you are thinking–why is that a photo of a bunch of people’s backs?  Well, the redhead with the torn gray shirt is FELICIA DAY.  She walked by me in the Marriott, and I was all: “HIGH FIVE FELICIA DAY,” and she totally high-fived me, and then I took this picture of her back to prove that I had interacted with Felicia Day.  I’m so smooth and awesome, I know. 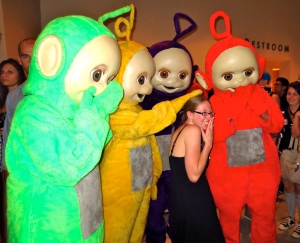 Some sassy lady friends of mine in various versions of Maria Hill and Black Widow costumes.

This woman was manning one of the food stations at the Marriott.  Jon gave her a useful Ratman sign.

We went to the Eryn Woods show for a bit (she was fun!) and then we saw this great Companion Cube on our way out of the ballroom.

We saw the Yip Yip aliens! 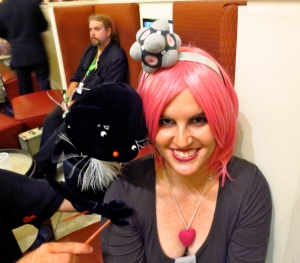 I made friends with a puppet. 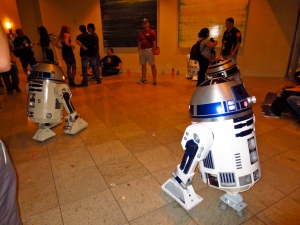 We caught up with some R2D2s. 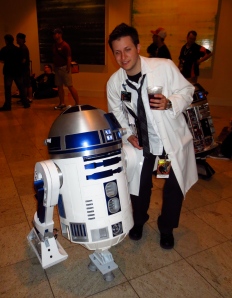 Jon made a new friend.

And I caught up with a Facebook friend, Shae!  Shae made a fantastic Sexy Moira from American Horror Story (which I love, can’t wait for season 2!).  She frequents karaoke at the Hilton–which is way fun, guys.  My goal next year is to perform something at karaoke at the Hilton!

Finally, we caught the tail-end of the Freezepop show.  I wish I’d seen the whole thing–the bit I saw was AMAZING.  This “Ermargerd!” sign pretty much sums it up.  Actually, it sums up all of Dragon*Con.

So, that’s a brief overview of my Saturday at Dragon*Con!  Hopefully I’ll get Sunday done by the end of the month, but if not you’ll hear all about it in October, when I’m back from observing Yom Kippur and celebrating Jon’s sister’s wedding in Charlotte!