I love TV (#peaktv). For the past five to six years, watching all the prestige television (#prestigetv?) I can find has been one of my primary, if not my primary, cultural pass times. The majority of my Facebook posts are me, statusing away about the amazing television I am currently watching.

I am also really good at watching the critically acclaimed television that not a lot of other people are watching, such as Fargo, The Americans, and The Leftovers. All so good! Seriously, you should watch these shows.

Frankly, I thought that this was a relatively new development for me: watching the #prestigetv that no one else watches, and telling everyone who will listen about it. However, it is not. Behold, from the May 23, 2003, issue of The Torch, my school newspaper:

Within this article, an 18-year-old Lindsay had the following erudite words to share about one of the greatest shows of all time, Buffy the Vampire Slayer: 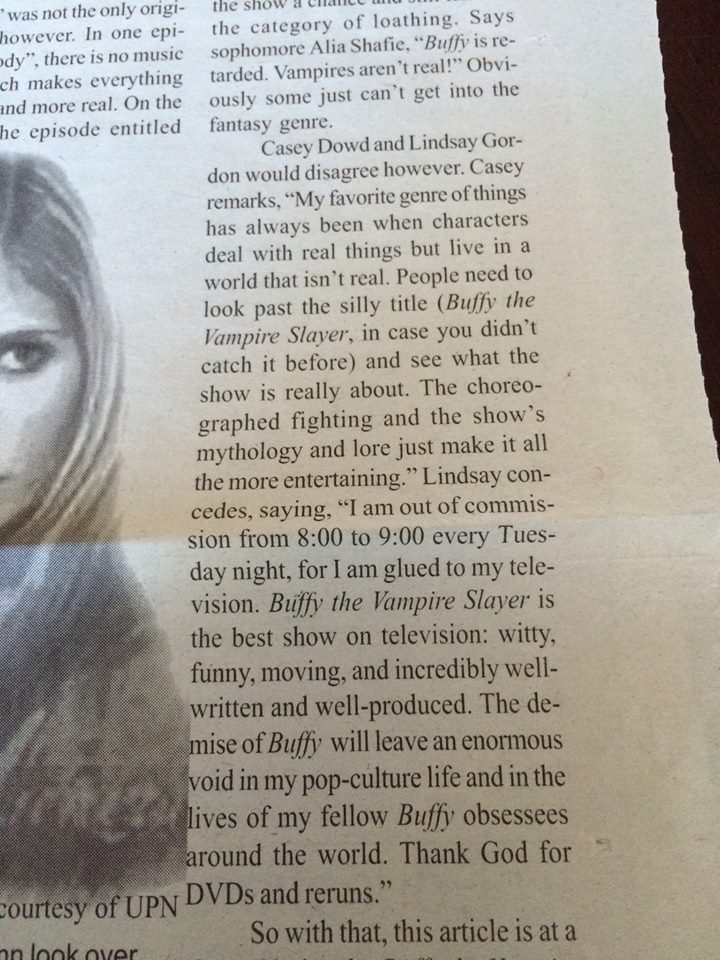 “I am out of commission from 8:00 to 9:00 every Tuesday night, for I am glued to my television. Buffy the Vampire Slayer is the best show on television: witty, funny, moving, and incredibly well-written and well-produced. The demise of Buffy will leave an enormous void in my pop-culture life, and in the lives of my fellow Buffy obsessees around the world. Thank God for DVDs and reruns.”

Buffy, appropriately, ended right as I graduated high school, and this was the last issue of Torch to be published before my graduation. My final words at Pine View: about television. How appropriate.

That said, I have been a television critic since I was a mere youth! Maybe I have missed my calling? Clearly, however, I know what I am talking about in terms of referring television: take my suggestions, friends, for lo, they are awesome!