I’m going to sidetrack from the birthday month for a minute.  Friday night I made a rare trip to downtown Raleigh to support my friend Heather, who was having a gallery opening at Flanders, a trendy and well-regarded Raleigh gallery.  I don’t often get to Raleigh, because it is a bit of a trek (30-45 minutes, depending on traffic), I frequently get lost, and one of the last times I went to Raleigh I got into a car accident.  However, every time I’m in downtown Raleigh I wish I got there more frequently.  It doesn’t have the gritty, community vibe of Durham, but it is a more urban setting and definitely has the ability to buzz.

First Friday is Raleigh’s monthly gallery night (Chapel Hill has second Friday, Durham has third Friday).  Flanders is down the street from CAM, Raleigh’s contemporary art museum, and a number of great galleries.  I’ve visited some other galleries in the past, but I spent most of this Friday on Martin Street and in the Warehouse District.

Jon and I kicked off the evening by getting dinner at The Pit, before heading over to Flanders to see Heather.  I’ve been to Flanders several times, and it is always extremely sceney.  The atmosphere is very much big-city art gallery, which I always say makes me feel not cool.  However, I knew much of the audience there that night.  So I guess I was sort of cool.

Heather’s work is being shown as part of a group show, called Codework.  All the following photos were taken by me, on my iPhone, so apologies for the graininess.

All the works in the show dealt with language, communication, and interpretation.  Since I have known Heather, she has been interested in codes and language.  This work is from her newest series, which takes locations that we frequent in our daily lives (the above is a parking lot, but she’s also done cubicles and funeral homes) and maps them out in an abstract but still understandable manner (I hope I got that right Heather!)

The above two works are some of Heather’s binary works.  She takes text, oftentimes famous, and converts it into ASC-II (I think, this is all very tech-speak!) which she then converts into binary, which she uses to make these amazing, hypnotic, vortex-y pieces.  I love them.  As you can tell, Heather’s work is incredibly thought out and very cerebral, you can learn more by checking out her website.

I was also loving Peter Oakley‘s carved-marble sculptures of every day objects.

END_OF_DOCUMENT_TOKEN_TO_BE_REPLACED

So, guys, after over two and a half years of searching and doubt and self-loathing and anger and sadness and misery at the state of the economy, I finally achieved my goal: I have attained a job in the art world.  I promised myself that this blog would not be a venting place for my fury at the universe during my job search, and I also promised myself that I could write a big, long, venty post chronicling my journey–but only when I achieved my goal of attaining a professional, full-time position in the art world.  So here’s my post.  I am glad to finally share it with you. 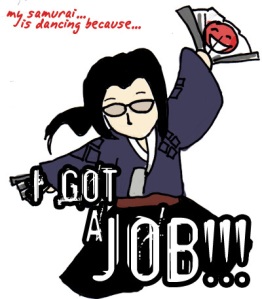 This is a big deal.  I have wanted to work in the arts since I was sixteen and I took Advanced Placement Art History with the amazing Pat Johnston at Pine View School for the Gifted.  I loved the course, excelled in the classwork, and got my well-earned 5 on my AP exam (I’m not still proud of that or anything).  After the class I decided that a job in the arts, preferably in a museum or gallery setting, would be my thing, and I behaved accordingly, so accordingly that I can summarize it in bullet points y’all:

-I interned at the Samuel P. Harn Museum of Art, the University of Florida’s art museum, for a good year and a half.  I spent one semester in the education department as part of a group initiative to plan programming for the undergraduate population at UF and I spent a year interning for the curator of contemporary art.

-I then launched myself straight into graduate school in Art History, heading to the University of North Carolina at Chapel Hill to pursue my Master’s and eventually (I hoped, back then) my Ph.D.

-While at UNC I interned at the North Carolina Museum of Art, co-curated an exhibit at UNC’s affiliate museum the Ackland Art Museum, and secured a summer internship at the Whitney Museum of American Art.  This was the spring of 2009 and this, guys, this is where the bullet points need to end, because things get messy.

END_OF_DOCUMENT_TOKEN_TO_BE_REPLACED

I’ve been in North Carolina for four years and I have yet to attend a pig pickin’.  Luckily I was able to remedy that this past weekend!

A pig pickin’ is basically a a giant cook-out whose center-piece is a barbequed whole hog.  My uncles have some friends in Raleigh who host an annual pig pickin’ at the end of every summer.   They invite tons of friends and the whole neighborhood and close down the cul-de-sac where their house is located.  The street is filled with tables and tents.  The hosts provide the meat and the dinnerware and all the guests bring a side or a dessert.  Since so many people show up the amount of food is insane.  We arrived about two hours after the event officially started and there was still plenty of food left. 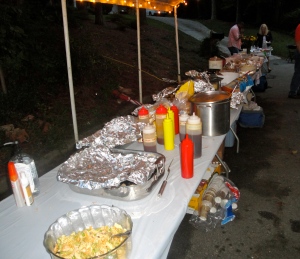 I brought an apple cobbler to share.  I’m hoping that people liked it!

The hosts evidently used to prepare and cook the pig themselves but this year they hired some assistance.  They also rented a huge barbeque on which to cook the pig. 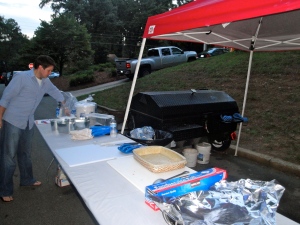 I didn’t have much pork since I’m not a huge pork-eater–I had a token bite or two–but I did indulge in some excellent chicken, a hot dog, a bunch of beans, and some random delicious cheesy casseroles.  Oh and quite a bit of dessert: a peach cobbler, my apple cobbler, cheesecake, chocolate chip cookies, etc.  I doubt that anyone went home hungry. 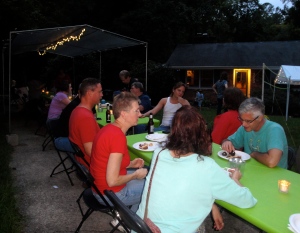 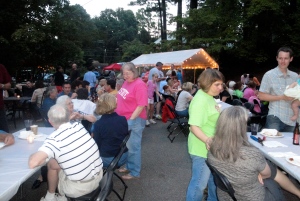 This was really an end of summer bash.  They even had fireworks! 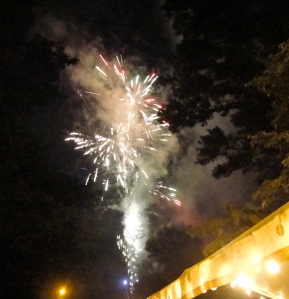 They actually had a lot of fireworks.  Considering it was an amateur display it was hugely impressive and went on for a long time.  We all enjoyed it, and so did this little guy: 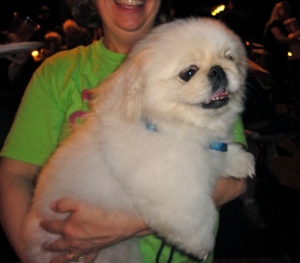 So cute!  He belongs to the hosts.  So fluffy.

I’ve attended my last major cook-out of the season, I guess that means summer is officially over.

And good thing Rosh Hashana is this week, lord knows I have some repenting to do!  Although it was only a bite or two…

The Raleigh Zombiewalk just tweeted that this year’s walk is October 22nd and that the zombies will be lurching to Moore Square at dusk.

I can’t seem to find a website for them so y’all will just have to trust me on this.  Or, you know, follow the zombies on Twitter.

My costume vibe is usually more gothy-pretty than bloody-rotting, but I might set aside my vanity for a night and douse myself in latex and stage blood.  Yuck yuck yuck.

Be there or be brains y’all! 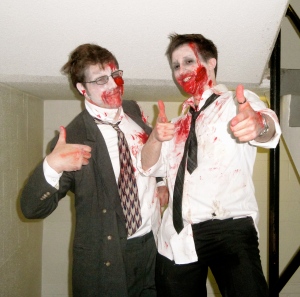 Over at NYMagazine theater critic Scott Brown and Bill Lawrence, the showrunner of Scrubs and Cougar Town, are having a tussle regarding Scott Brown’s extremely negative review of Zach Braff’s new play All New People.

So basically Scott Brown doesn’t like Zach Braff because of his Zach Braffness and also Garden State, and I agree with both points because non-Scrubs Zach Braff is insufferable and, really, J.D. is borderline insufferable much of the time and also Garden State is a pretentious and overrated movie.  Scott Brown spends much of his review of All New People on an anti-Zach Braff crusade before ultimately reviewing the play.  Bill Lawrence, in an open letter to Scott Brown, is all, “dude, you can’t go on a rant about how you hate Zach Braff, who is my friend, and then give his play like, all of two paragraphs, that just isn’t cool dude.”  Bill Lawrence also attacks Scott Brown for being a pretentious, wordy, stuck-up theater critic which, duh.  Come on, what else is a theater critic?

And then Scott Brown writes an open letter to Bill Lawrence and basically ends with “sorry I didn’t like your friend’s play, dude.”

Anyways, Bill Lawrence’s letter is hilarious and Scott Brown’s letter is slightly less so–despite a hilarious and, yes, pretentious reference to H.P. Lovecraft ( ph’nglui mglw’nafh Cthulhu R’lyeh wgah’nagl fhtagn!) but the whole thing is just really entertaining to someone like me who spends way too much time reading culture websites.   You can read the whole shebang here.

I’m also really liking the NYTimes’ article on Kalup Linzy, an artist I was only loosely aware of until seeing his work at the North Carolina Museum of Art’s 30 Americans show.  The show had a number of his drawings as well as his film, As Da Art World Might Turn, which I found amazing and hilarious.  Linzy is part Andy Warhol and part RuPaul and part John Waters and part soap opera and he also collaborates with James Franco (but who doesn’t) and I just think he is a lot of fun in an art world that takes itself far too seriously.  I also think it is telling that the article is placed in the NYTimes style section rather than the Arts Section.  Back when I was an “academic” I was all about art that blurred the line between high and low culture, so Kalup Linzy is right up my alley.

Finally, I am definitely all about the NYTimes Magazine‘s profile of restauranteur Danny Meyer.  I have eaten at Shake Shack (numerous times and locations), Eleven Madison Park, and Union Square Cafe and have extremely positive feelings about the food, service, and ambiance at all of the restaurants.  The article is a great look into the crazy busy life of the man who has made perfect hospitality and customer service his trademark and his gold mine.

And those are the internet happenings that have entertained me on this Thursday!